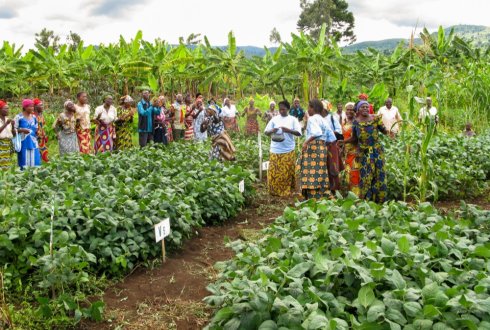 In the 10-year existence of the N2Africa scientific project, more than 600,000 small African farmers have been supported to increase their land’s productivity through nitrogen fixation. The WUR project, which came to its end this year, not only gave them better harvests, but also easier access to high-quality seeds and healthier nutrition. A magazine published today looks back on 10 years of N2Africa.

It all started in 2007 in Arusha, a city in northern Tanzania. At a conference, project leader and WUR professor Ken Giller met a former student. She was working for the Bill & Melinda Gates Foundation, which eventually contributed many millions in financial support for the research.

Giller: “From the start, we wanted to put nitrogen fixation to work for small farmers in Africa, making the very best technologies available to these farmers who were learning how to work with it. The primary question our research addressed was: ‘What works where, when, why and for whom?’

Enriching the soil with nitrogen by fixing it from the air is a sustainable and effective way of ensuring better yields on poor soils. With N2Africa, scientific research has been used to transfer knowledge to smallholder farmers and development workers, to train Master's students and PhD candidates, to strengthen the position of women, and to provide access to input-output markets through public-private partnerships.

Over the past decade, N2Africa has been active in a large number of African countries: Ethiopia, Tanzania, Uganda, the Democratic Republic of Congo, Ghana, Kenya, Malawi, Mozambique, Nigeria, Rwanda and Zimbabwe.

Giller explains: “In each country, we worked with at least thirty organisations from the public-private sector, from researchers to cooperatives, and from NGOs to seed producers. These collaborations have been essential for us to spread our message as widely as possible.”

Giller was looking for a project in which his research could add value to people's lives: “‘I saw that my research in this area could have a huge impact for small farmers in Africa. And fortunately the Bill & Melinda Gates Foundation saw that potential too. This allowed me to add value to my life's work. It was a once-in-a-lifetime opportunity for me.”

The direct result of N2Africa is that farmers' families now have a higher yield thanks to biological nitrogen fixation, resulting in greater food and nutrition security and higher incomes. The families also benefited from the network built to improve access to information, agricultural inputs and markets.

The project is coming to an end, but that does not mean that there is no room for improvement. Giller: “First, the dissemination of knowledge and the availability of seeds, fertilizers and other things can be improved. We should not underestimate how difficult it is to set up such a functioning value chain. Secondly, we must continue to convince governments, both inside and outside Africa, of the importance of investing in rural areas.”