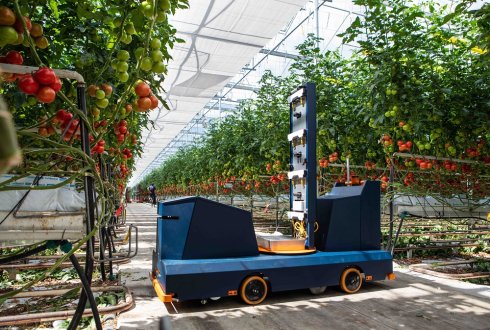 Tomato growers would prefer to see the tomatoes grow all day with their own eyes. However, that is quite time-consuming. The Plantalyzer - developed by the Greenhouse Horticulture Business Unit at Wageningen University & Research and HortiKey / Berg Hortimotive - drives fully automatically alongside the crop and measures the size, number and ripeness of the tomatoes on the way.

The Plantalyzer saw the light of day for the first time in 2018. It's a self-driving cart that can drive through a path in a greenhouse. Since that first launch, WUR and HortiKey (part of Berg Hortimotive) have been working on a new version of the robot. One of the improvements is the number of cameras. The previous version had two cameras; the new Plantalyzer has six: three sets of two. With those 3D cameras, the tomato crop can be displayed even better, and over a larger range: up to 1.5 meters.

The vision software developed by WUR analyzes the images. The color of the tomatoes is an indication of the ripeness. The Plantalyzer initially compared that color with a so-called harvest card: it states the life phase of each tomato color. Existing harvesting cards were found to contain errors. That is why WUR has improved the harvest charts for the Plantalyzer.

The Plantalyzer stores all data about the crop locally. As soon as there is a WiFi connection, the Plantalyzer sends the data to a central computer. With this, a grower can, for example, manage harvest staff or make a harvest forecast. In the future, the grower can also see whether there is a spot disease: the camera makes spots on leaves and fruit visible. The Plantalyzer is expected to be able to identify the diseases involved. The next step will be a Plantalyzer for cucumbers.