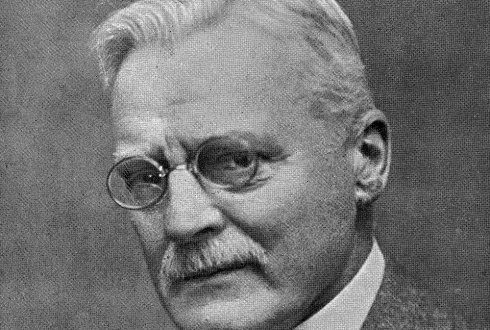 Gerrit Grijns was professor of Animal Physiology at Wageningen from 1921 until he retired (at the age of 70) in 1935. In the academic year 1929-30 he was also rector magnificus for a year, but what gives Gerrit Grijns an important place in the annals of science is his contribution to the discovery of vitamins. He was co-discoverer of vitamin B1 (thiamine) as the successor to the later Nobel Prize winner Christiaan Eijkman. The Human and Animal Physiology chair group still does research on vitamins and energy metabolism to this day.

The name Gerrit Grijns is now honored with a new collaborative venture between the Agrotechnology & Food Sciences Group and the Animal Sciences Group. In this new institute – Gerrit Grijns initiative - chair groups from both departments are going to work together on healthier diets, better food products and functional health.

Grijns was appointed in 1896 to take over the research in the Medical Laboratory in Batavia. This was a homecoming of sorts: after graduating in medicine at Utrecht, he had already been assistant in the Dutch East Indies from 1892 to 1894. In his new post, Grijns spent three years conducting a series on nutrition tests on chickens, with the aim of identifying a mystery substance in wholegrain rice.

He eventually concluded that there was an as yet unidentified substance in wholegrain rice which the nervous system needed for its metabolism. According to Grijns, polyneuritis was not caused by something in the rice – whether a toxin, a bacterium or anything else – but precisely by something that was lacking. In this case: a protective substance that was removed with the outer husk of the rice. Grijns came up with the great term ‘partial hunger’, thereby discovering the diseases of deficiency.

Grijns returned to the Netherlands in 1917, and spent some time working with his former teacher Eijkman, by now professor of Health at Utrecht. Grijns’s protective substance, which we now call vitamin B1 or thiamine, was eventually isolated in its pure form by the Dutch tropical medicine specialists Barend Jansen and Willem Donath. The term vitamin was already in full use by then.

Four years after his return to the Netherlands, in 1921, Grijns was appointed professor of Animal Physiology at Wageningen. Here he concentrated on research on the relation between diet and fertility and milk yield in cows. Vitamins reared their heads here too: he discovered, for example, the importance of vitamin E for reproduction. Six PhD theses were written under his supervision.

In 1926 and 1927, Grijns was nominated for the Nobel Prize in Medicine.
Five years after his departure from Wageningen, Grijns received the Swammerdam Medal. This prestigious distinction is awarded every ten years by the Society for the Promotion of the Natural, Medical and Health Sciences, which is linked to the University of Amsterdam. Grijns’s forerunners include big names such as the German zoologists Ernst Haeckel and Max Weber, the Dutch biologist Hugo de Vries and the German embryologist and Nobel Prize winner (1935) Hans Spemann. The inscription on the medal calls Grijns the ‘founder and father of the current science of foodstuffs’.

Back to the Gerrit Grijns Initiative main page