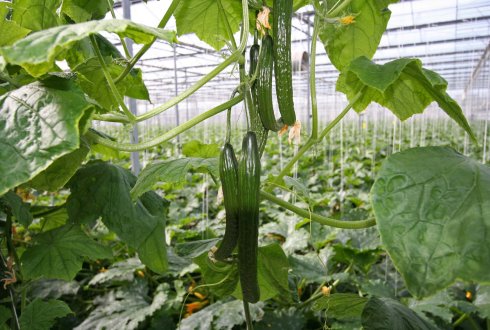 The cucumber collection of CGN is only composed of the cultivated Cucumis sativus and holds currently (March 2012) 937 accessions.  A few accessions of the subspecies C. sativus var. hardwickii and C. sativus var. sikkimensis  are present. It is one of the largest collections in Europe and comprises of 375 cultivars, 126 landraces,17 research material, 5 accessions of C. sativus var. hardwickii  which is considered to be the wild form and 413 samples of unknown population type which need to be improved. A diversity study with molecular markers revealed that the landraces are genetically clustering apart from the rest of the collection. A quarter of the collection are cultivars originating in Europe of which 144 accessions are from the Netherlands. Unique landraces have been collected in Egypt, Pakistan, Kyrgyzstan and Uzbekistan

In the period 2001 - 2006 a total of 134 accessions were screened for resistance to powdery mildew (Sphaerotheca fuliginea), and downy mildew (Pseudoperonospora cubensis).

To be incorporated in the collection, accessions need to have a minimum seed viability of 80% for cultivated material and 60% for accessions of wild species. Regeneration is carried out when seed viability is to low or when the remaining seed quantity has dropped below 12.5 g.
Regeneration/multiplication takes place in insect-free glasshouses on a substrate system where the stems are grown along ropes. For cucumber, which is a  cross-pollinator, ten plants are used. When samples are heterogeneous, fourteen plants are used.
The Dutch breeding companies assist in the regeneration of cucumber. Some accessions which are difficult to regenerate are put in isolation cages with bumble bees for pollination. During the growing season plants are monitored by the Dutch Plant Health Service for seed borne diseases in order to prevent seed contamination.

Characterization of fruit vegetables takes place during regeneration. Almost all accessions have been morphologically described. Until 2006 about 30 descriptors were used for each crop. Since 2006 the fruit vegetables are characterized by minimum descriptors developed by the ECPGR Working Groups. The minimum descriptor lists consist of about ten descriptors per crop and can be found at the ECPGR Solanacaeae webpage. All characterization data are made available on-line and in downloadable files.
The collections are well photo-documented, many pictures of (un)ripe fruits, plant and flowers are available. When necessary new pictures will be taken during regeneration and added to the CGN website.

In 2009 the Institute of Vegetables and Flowers of the Chinese Academy of Agricultural Sciences in Beijing, China used 80% of the CGN cucumber collection in a diversity study with SSR markers in order to develop a core collection (publication in press). The results have been shared with CGN and will be used to improve the data and composition of the collection.