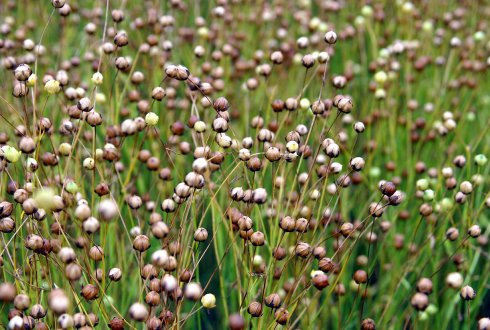 The collection consists of 947 accessions of both fibre flax and linseed.

The Linum collection was established long before the Second WorldWar by the Department of Plant Breeding (IVP) of the Agricultural University of Wageningen. Later the collection became a working collection of the former Foundation for Plant Breeding (SVP) at Wageningen and was utilised in flax breeding research programmes between1948 and 1996. The Linum germplasm was particularly utilised for resistance breeding to flax scorch (Pythium megalacanthum), wilt (Fusarium oxysporum f. sp. lini) and rust (Melampsora lini). Material of the collection was also used for the improvement of the fibre content.
The collection was adopted by CGN in 1995 ( Van Soest, 1998). The adoption of the collection by CGN was encouraged by a group of four private Dutch breeding companies, who were anxious to see this valuable collection properly maintained and stored under optimal conditions. In 1996 a cooperation was established between the breeding companies and CGN.

The collection includes 490 numbers of fibre flax, 440 accessions of linseed and six accessions of five wild species. It mainly consists of cultivated materials including landraces, cultivars and research material of Linum usitatissimum. A large part of the collection is of European origin but accessions from the USA, Canada, Australia, Turkey , Japan and several countries of N. Africa are also included in the collection (Soest, 1998).

There are several old landraces in the collection, e.g. Fries Landras (NLD, 1816), Crete (TUR, 1914), Bombay (IND, 1917) and Soddo (ETH, 1914). The date of origin of several other landraces is not known. Furthermore, several cultivars developed early in this century , often from old landraces, are included in the collection (e.g. Blenda, NLD, 1926; Frontier, USA, 1898; Pioneer, GBR, 1921 and Ottawa White Flower, CAN, 1913). A large number of accessions, described as research material, are found in the collection. The information on this material is limited, often the origin as well as the properties for which the material (particularly research lines) was selected, are not known. Most of this research material was developed more than 20 years ago.

Before adopting the collection, the last regeneration of the Linum collection was conducted by the former Foundation for Plant Breeding (SVP) in 1981. The collection was stored in paper bags under medium term storage conditions (4 °C and 30% relative humidity). Material from the collection was used in breeding research up to 1995. Although the viability of the seeds of most of the collection was still reasonable the seed quantities of a large number of accessions became limited. In 1995 CGN took the decision to adopt the collection and in 1996 an agreement was made between CGN and the group of four Dutch private flax breeding companies, by which the breeders agreed to rejuvenate, characterize and partly evaluate the Linum collection. Annually, each company receives 50 accessions which are multiplied, characterised and evaluated for some properties following a jointly developed descriptor list (Soest, 1996). Presently approximately 600 accessions have been regenerated.

In order to conduct the characterisation and evaluation of the collection a minimal descriptor list has been developed (Soest, 1996). The descriptors for Linum are based on the list of the International Flax Data Base (IFDB) of the FAO European Cooperative Network on Flax (Rosenberg and Pavelek,1993, Pavelek, 1995, Pavelek, 1998,). In total 16 descriptors were included on the list and after a final discussion with the flax breeders the list was divided in the following two groups:

A flax core collection of 83 accessions, was developed during the period 1998 to 2001, reducing the accessions subsequently over the years. The reduction was based on passport data and information obtained after characterisation and determination of fible content data of selected material grown in the field from 1999 to 2001 (Soest and Bas, 2002). From this collection 52 accessions were evaluated for fible content both by the warm retting and green decortication methods by CGN and ATO (Agrotechnological Research Institute, Wageningen) (Oever et al., 2003). These data are downloadable from the CGN website.