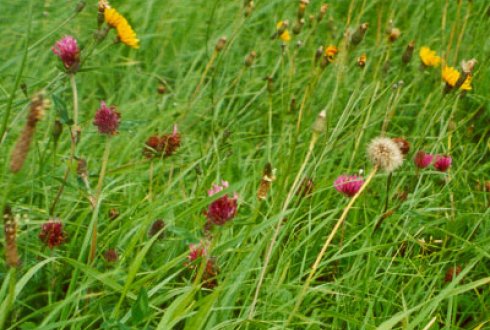 The CGN grasses collection consists predominantly of economical important forage grasses cultivated in N.W. Europe. The Lolium collection, including accessions of perennial and Italian ryegrass, forms with 394 accessions the most important collection. This collection includes besides modern cultivars also old cultivars and ecotypes collected in old Dutch pastures. A study on Lolium perenne carried out by van Treuren et al (2005) aiming at the analysis of variation present in populations occurring in old Dutch grasslands with grasslands, in nature reserves and in cultivars using AFLP markers and morphological traits indicated that basically the same range of genetic variation is covered by the three groups, although the reference varieties analysed harboured lesser variation. Therefore it was concluded by van Treuren et al (2005) that no specific conservation measures are currently needed to maintain genetic diversity of perennial ryegrass occurring in old Dutch grasslands (the same conclusion could be drawn for white clover as this species was also analysed in this study).

The CGN clover collection consists of 165 white clover (T. repens) and 98 red clover (T.  pratensis) accessions. The red clovers were mainly obtained during  collecting missions in the Netherlands carried out in 1985 and 1986 (van Soest and Dijkstra, 1986; van Soest and Dijkstra, 1998). The collecting sites in all provinces of the Netherlands are presented in Figure 2. Besides the collected ecotypes (139 accessions), the collection consists of 26 accessions of landraces, cultivars and tetraploid breeding lines. Under the group of old landraces there are four old Dutch landraces: Fries-Groninger-, Roosendaalse- and Gendringse red clover and Rode Maasklaver. In 1997 and 1998 collecting trips were organised to all provinces in the Netherlands and some 50 accessions of white clover were collected in old Dutch grasslands. Currently the white clover collection consists of 68 ecotypes and landraces and 28 cultivars amongst which 21 old cultivars from the period between 1924 and 1990.

Next to the clover material from European origin there are around 50 accessions from Central Asian origin (Uzbekistan, Kyrgizstan) collected during 1998 and 1999.

Previously all forage crops were regenerated in specially isolated plots in rye fields. Since 1999 Triticale has been used as isolating crop. Only material of Poa pratensis is not regenerated in isolation plots. The distance between the plots is approximately 50 m. Material that needs vernalisation is kept in unheated greenhouses during the winter. After sowing the seeds in the summer, some 50 plants are planted in April of the following year in the isolation plots. To prevent lodging, some grass species are staked. Harvest of the seeds is carried out in July/August.