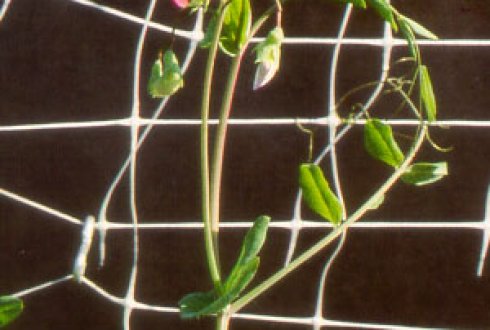 Lately the Pisum, the Vicia faba and to a small extent the Lupinus collections were extended with material from the Centre for Plant Breeding and Reproduction Research (CPRO-DLO) and accessions received from several breeding companies from the Netherlands and some landraces from two East European genebanks. The grain legume collection has not a high priority in the CGN system and receives less emphasis.

The collection mainly consists of material of P. sativum, only a few wild species including P. abyssinicum, P. arvense and P. elatius are available. The 25 accessions described as Pisum (unknown) are primitive forms of P. sativum and probably also some unidentified wild species. The collection includes over 341 landraces, 53 from Europe including only three from the Netherlands ('Grauwe erwt', 'Noord-Hollandse Rozijnenerwt' and 'Wijker Vale'). The other European landraces are mainly from East and South Europe. More than 250 landraces are from the centres of origin in Asia (168) and Africa (88). This material is rather primitive and not well adapted to North European conditions. It includes nearly 150 accessions from Pakistan and Ethiopia, material collected with Dutch participation (Hashmi, et al., 1981). The cultivars (448) form the greater part of the collection and consist of dry peas for animal feeding and peas for human consumption. The latter group includes over 140 cultivars. Most of the cultivars are of European origin and only a limited number are from North America and Australia. There are 91 accessions classified as research material, particularly from Europe and the USA. The population type of a relative large group of accessions (99) is not defined. Furthermore the country of origin of 248 accessions is not known.

The faba bean collection consist of 726 accessions of the cultivated species V. faba. There are 393 landraces in the collection, largly from Asia (188) and Africa (114). These landraces were collected in the centres of origin of the Faba bean, particularly in a number of countries of the Middle East such as Syria, Afghanistan, Pakistan, Iraq and Turkey. Also present are 78 landraces from the sub-centre of origin in Ethiopia. Only 54 landraces from Europe are found in the collection, including the old Dutch landrace 'Oldambster'. The faba bean collection includes 228 cultivars. The accessions are mainly from Europe (195), particularly from the Netherlands (49), Germany (60), United Kingdom (20), France (16) and Russia (11). Some old Dutch cultivars presented in the collection are 'Mansholt's Wierboon'(1892), 'Adrie' (1919) and 'Wierboon C.B'. (1931). Only a few cultivars from Asia, Africa and America are present in the collection. 10 accessions belong to the 'population type' research material. The country of origin and the population type of respectively 58 and 95 accessions are not known.

This small collection includes only 69 accessions of the species L. albus and L. luteus. In the collection are only two landraces of Eastern Europe and 19 cultivars from The Netherlands, Germany and Poland. The other material mainly consists of research material of the former Foundation for Plant Breeding (SVP) and Poland (van Soest en Boukema, 1995).

Faba beans and lupines are regenerated in plots spatially isolated in winter rye fields with a distance of approximately 50 m between the plots. The size of the plots is 8 m2, and normally 200 seeds are directly sown in the field. Peas are sown directly in the field without isolation. Per accession 100 seeds are sown against a fence. During the growing season the accessions are both visually and by means of serological tests monitored for Pea Seed-borne Mosaic Virus (PSMV). Plants detected with PSMV infections are removed entirely.
During the regeneration, accessions of P. sativum and V. faba are characterized for respectively 14 and 13 different agro-morphological traits, using CGN minimal descriptor lists (Dijkstra and van Soest, 1986). The lists partly derived from the IPGRI and UPOV descriptor lists and was developed after consultation several breeders of grain legumes. Presently 7700 characterization data of Pisum and over 8300 data of V.faba are included in the information system GENIS (van Soest and Boukema, 1995).
Prof. J. Kraft (USDA/ARS, Prosser WA, USA) evaluated several Pisum accessions of Pakistan for resistance against three diseases ( Fusarium solani f. sp. pisi, race 2 of Fusarium oxysporum f. sp. pisi and Aphanomyces euteiches). The evaluation data are included in GENIS.

The two Lupinus species have only been characterized for two traits; plant type and flower colour.