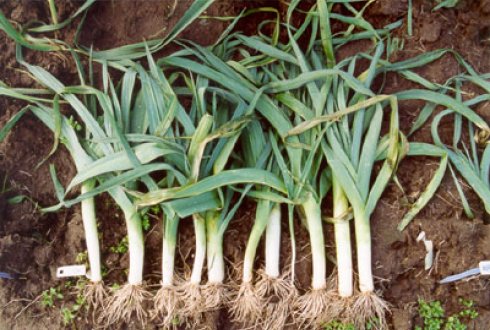 The Allium collection originates from the former Institute for Horticultural Plant Breeding (IVT).The IVT collection existed mainly of onion and leek cultivars collected at Dutch seed firms in the framework of the European Cooperative Programme for Crop Genetic Resources Networks (Meer & Bennekom 1983). After adopting this collection, much attention was given to rationalise the collection by bulking duplicates both from onion and leek. This effort resulted in a considerable reduction of the collection (Boukema & Groot 1991).

The collection was replenished with material collected in a multicrop expedition in Pakistan (Hasmi et al. 1981), material collected in Bulgaria, accessions from multicrop expeditions funded by IPGRI in Egypt, from collecting missions in the framework of the German-Dutch cooperation in Plant Genetic Resources to Turkey, Russia (Daghestan), Armenia and Georgia and from a multicrop collecting expedition to Uzbekistan (Soest et al. 1998). The collection was completed with missing prominent open pollinated Dutch and European varieties and with material from the working collection of the CPRO-DLO. Wild material was also introduced from Botanical Gardens and other genebanks. In the near future wild material collected in Uzbekistan will be added. CGN takes actively part in the Allium network of the European Cooperative Programme for Crop Genetic Resources Networks. The passport data of the CGN Allium collection are included in the ECP/GR Allium database, held by HRI, UK). CGN gives high priority to the Allium collection and aims to create a representative sample of the total genetic diversity in onion and leek and its wild relatives in cooperation with other European genebanks.

The collection includes presently 370 accessions of seed propagated Allium's. The onions are for the greater part varieties from the Netherlands and Japan, but the collection includes also landraces from Egypt, Bulgaria, Russia, Pakistan and Uzbekistan. The bunching onions are nearly all varieties from Japan. The leeks are predominantly cultivars from the Netherlands, but cultivars from France and Denmark and some landraces from Bulgaria are included as well. The kurrat's are landraces originating from Egypt. The Chinese chives are landraces from Thailand and Australia. Of 55 accessions of the cultivated material the population type is not known. Most of the wild species belong to the subgenus Rhizirideum, only some to the subgenus Allium.

About 150 accessions will be added to the collection after they have been regenerated. This relates for about 25% to onions, part of which are in the process of regeneration. Constraints in regeneration are faced for some of the short-day material, particular for material from Pakistan. Also regeneration of wild material causes difficulties. It can take several years before enough seed is produced to fulfil the CGN standards. For regeneration 60-120 plants are used. After onion bulbs have been harvested, dried and potted they are placed in a non-heated glasshouse for overwintering. Because of problems with Fusarium attack, seedlings of leek are planted directly in pots and overwintered from November on in a glasshouse at 5-10°C. As soon as flowers appear, the plants are transferred to isolation rooms and pollinated by blowflies.

Most of the onion and leek material (including kurrat) has been characterized for respectively 20 and 15 different traits, according to CGN descriptor lists (partly derived from UPOV and ECP/GR descriptor lists). Cultivars are characterized during bulb/mature plant production for regeneration. Evaluation data on characters such as diseases are obtained from users of the material. Data on resistance to Peronospora destructor, Sclerotinium cepiforum, Botritis aclada, B. squamosa, Puccinia porri and Thrips tabaci are available.