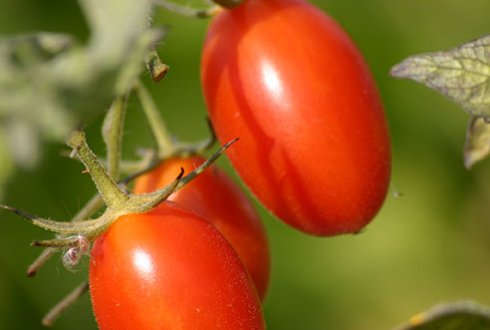 The collection currently (March 2012) includes1309 accessions and comprises of 798 cultivars, 116 landraces, 185 research material, 103 accessions of wild species and 107 samples of unknown population type. The largest part of the collection is formed by the cultivated species Solanum lycopersicum. Most varieties come from Europe, USA  and Canada and the former Soviet Union. Landraces are represented from countries all over the world. The wild species originate mainly from Peru and Ecuador.

Recently, the original name Solanum lycopersicum (Heiser and Anderson,1999) has been reintroduced. Rick (1976) proposed earlier to divide the genus Lycopersicon into two subgenera, the ‘lycopersicum complex’ and the ‘peruvianum complex’ (Heuvelink, 2004; Taylor and Al-Kummer, 1982). The ‘lycopersicum complex’ consists of the six Solanum species S. lycopersicum, S. pimpinellifolium, S. cheesmaniae, S. neorickii, S. chmielewskii, S. habrochaites and S.pennellii, that can be “easily” crossed with cultivated tomato. S. peruvianum and S. chilense, which have low ability to cross with Solanum lycopersicum, belong to the latter complex.

To be incorporated in the collection, accessions need to have a minimum seed viability of 80% for cultivated material and 60% for accessions of wild species. Regeneration is carried out when seed viability is to low or when the remaining seed quantity has dropped below 1.0 g.

Regeneration/multiplication takes place in insect-free glasshouses on a substrate system where the stems are grown along ropes. Seven plants are used to regenerate self-fertilising tomato. Exceptions are heterogeneous accessions and outcrossing species like S. peruvianum of which at least 10 plants per accession are hand pollinated with a mixture of pollen. When samples are heterogeneous, fourteen plants are used.

The Dutch breeding companies assist in the regeneration of  tomato. Some accessions which are difficult to regenerate are put in isolation cages with bumble bees for pollination. During the growing season plants are monitored by the Dutch Plant Health Service for seed borne diseases in order to prevent seed contamination. Special attention is given to tomato where visual checks and leaf tests are performed for the presence of Clavibacter michiganensis spp. michiganensis , Xanthomonas campestris pv. Vesicatoria and Pepino Mosaic Virus (PepMV) which all can be present on and in the seeds.

Characterization of fruit vegetables takes place during regeneration. Almost all accessions have been morphologically described. Until 2006 about 30 descriptors were used for each crop. Since 2006 the fruit vegetables are characterized by minimum descriptors developed by the ECPGR Working Groups. The minimum descriptor lists consist of about ten descriptors per crop and can be found at the ECPGR Solanacaeae webpage. All characterization data are made available on-line and in downloadable files.

The collections are well photo-documented, many pictures of (un)ripe fruits, plant and flowers are available. When necessary new pictures will be taken during regeneration and added to the CGN website.