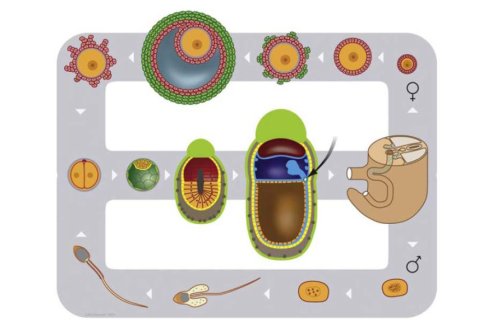 How can the latest innovations in animal reproduction and cryopreservation technologies be used in animal breeding and conservation programs? What are the benefits of the use of such technologies and how is the balance when also considering animal welfare, ethical considerations, and societal acceptability? And finally, where should we focus our research priorities?

These questions were addressed the 5th of September at an inspiring Symposium, organised by the Animal Breeding and Genomics group and the Centre for Genetic Resources, the Netherlands (CGN) of Wageningen University & Research. The Symposium was well attended by a variety of experts and stakeholders, representing different domains and farm animal species.

Dr. Henri Woelders, of Wageningen Livestock Research (WLR) and the Centre for Genetic Resources, the Netherlands (CGN) presented on the potential of cryopreservation and use of various types of germplasm in pigs and chicken, focussing on embryos, gonads, primordial germ cells and semen, and including some highlights from the EU Horizon 2020 IMAGE project (LINK). He showed that cryopreservation of poultry semen is applicable for long term conservation of rare breeds, and may also be used for maintaining breeding lines. Cryopreservation and transfer of gonads was shown to be an effective means in bird and mammalian species, while primordial germ cells offer possibilities and potential advantages in bird and fish species. Also, recent advances in pig embryo cryopreservation were shown and it was demonstrated how mathematic modelling of cellular events during embryo cryopreservation are extremely helpful.

Recent progress in vitrification, oocyte and embryo culture in horses, cats and cattle

Prof. Ann van Soom of the Faculty of Veterinary Medicine, Ghent University, presented an overview of the major progress made in the past years in vitrification, oocyte and embryo culture in horses, cats and cattle. Oocyte vitrification (cryopreservation) has the potential to rescue gametes from deceased animals, it would make oocyte banking for research possible, and superior female genetics could be cryopreserved. Human oocyte vitrification works very well, further work on oocyte vitrification in cattle,  horse, cat can learn from human. Various factors important for successful vitrification of bovine and equine oocytes were addressed. Illustrative example of progress made is the world-first foal born in 2017 after development of an improved vitrification protocol for equine immature oocytes.

In vitro production, cryopreservation and transfer of horse embryos

Prof. Tom Stout of the Faculty of Veterinary Medicine, Utrecht University, explained in detail the process of in vitro production (IVP) and cryopreservation and transfer of horse embryo’s. Interest in this method is increasing rapidly, especially for genetically very interesting mares, for instance mares competing in sport, or deceased, but genetically valuable mares. But also if too little viable sperm are available. Utrecht can do ovum pick-up from mares and collaborate with Avantea, Italy for in vitro production and cryopreservation of embryos. Because of the large numbers, this work provides insights into factors affecting success rates of ovum pick-up and in vitro embryo production. For mares differ strongly in numbers of oocytes obtained per round.  Healthy offspring from the IVP embryos is being obtained (with increasing success rates through the years). Based on experiences in other species the offspring is expected to be fertile, although for the horse this needs to be established as the obtained offspring are not yet fully in use for reproduction.

Production of sperm and oocytes in vitro

Dr. Bernard Roelen of the Faculty of Veterinary Medicine, Utrecht University, explained what can be expected from production of sperm and oocytes in vitro, on the basis of the latest international scientific progress in mice. Embryonic stem cells (ESCs)  from the ‘inner cell mass’ of an early embryo give rise to all future cells and tissue of an animal, including the primordial germ cells, which ultimately form the germ cells (sperm or oocytes). Also in vitro, the ES cells can be used to generate various types of cells and tissues. Yamanaka's Nobel Prize–winning research paved the way for similar in vitro development from induced pluripotent stem cells (iPSCs). This led also to recent successful in vitro production of human oogonia from iPSCs. Bernard Roelen discussed potential application, such in ‘Whizzo-Genetics’ approaches in cattle, as the generation interval can be drastically shortened and genetic improvement can thus be accelerated. In addition, somatic cells from critically endangered species could be used to create germ cells and future offspring.

The final discussion was focussed on further opportunities and the needs from breeding and conservation perspectives. Based on knowledge gained in the human domain, it was suggested that cryopreservation of ovarian cortex for several animal species, and of primordial germ cells in bird species, might be very relevant strategies for future gene banking ex situ conservation of breeds and breeding lines, which is also in line with the recommendations from the IMAGE project on gonadal cells and tissues. In the EU countries, the current EU guidelines and national legislation restricts or prohibits the use of PGCs and gonad transplantation. However, amendment of national regulations are in principle possible. Further research is also needed to develop or optimize procedures to produce embryos in vitro and to cryopreserve oocytes and embryos. From conservation perspective this is relevant to conserve female genomes of (endangered) breeds/species. For breeding companies this is also very relevant for accelerating and disseminating genetic progress by production of embryos in vitro.