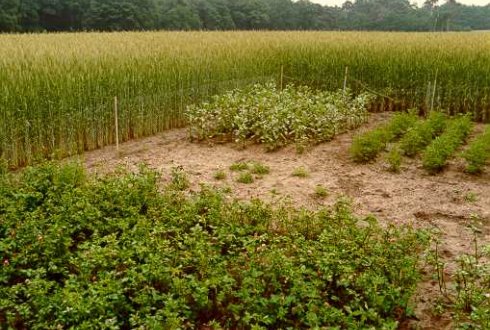 Regeneration is the renewal of a seed sample by taking a random sample of seeds, sowing and growing the resulting plants under conditions so that the seeds harvested will possess the same characteristics as the original population.

When regenerating germplasm a number of points must be taken into consideration (van Soest, 1990):


To minimize the impact that regenerations can have on the genetic identity of a seed sample, the frequency of regeneration should be kept as low as possible.

Plants that during regeneration clearly seem contaminants and do not belong to the total population are removed.

A very important aspect of regeneration is the production of healthy, viable seeds. In general, regenerations under glass yield better quality seeds compared to regenerations in the field.

Germplasm that is distributed by genebanks, must be carefully checked for the presence of seed-borne pathogens and pests to prevent contribution to the spreading of diseases and pests. It should provide an uncontaminated basic stock for breeding programmes. CGN maintains a high standard of disease and pest control, including pathogens with no official quarantine status, such as Lactuca Mosaic Virus.

During regeneration at CGN, the Plant Protection Service inspects all crops, particularly on seed born viruses.

Research has been performed to study the use of honey bees and blowflies for pollination of cross pollinating crops such as cabbages (Boukema et al., 1988). Blowflies are used to cross pollinate crops in isolation cages. These flies are purchased, as larvae, from a commercial producer of larvae used as live bait for fishing, or as insect pollinators.


The firm produces mixtures of different types of larvae, of which the flies are either active under warm conditions (up to 35°C), or under colder conditions.

Depending on demand, 10-20 litre of larvae (in sawdust) are purchased per week. After 3-4 days in a dry room at 25°C, pupae develop. These can be kept for ± 1 month at 2°C. The pupae for immediate use are put in containers with a gauze lid and are kept at 25-30°C and 60-70% RH, to produce adults in ± 8 days. The flies inside these containers are fed a mixture of sugar and water. Three times a week, upon demand some 200 flies are released in the isolation rooms (±4x4x2 m).

Sometimes bumblebees are used for the pollination of cross pollinating crops.