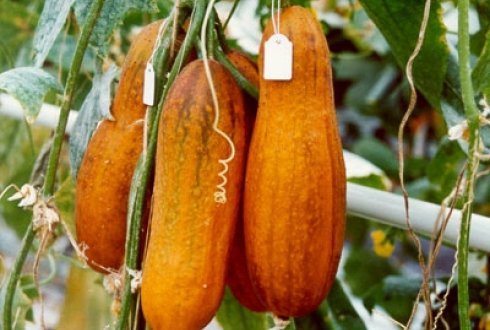 Some accessions germinate irregular. It is unknown if this is caused by seed dormancy. Germination can  sometimes be improved by cutting the seed top.

Before sowing, seeds are given a heat treatment to avoid infection with seed transmittable viruses like CGMMV.

Seeds are sown in seed trays with a soil mixture at 25°C, generally in February, but it is possible to sow between January and July. After 7 to 30 days the seedlings are transplanted to Rockwool blocks and placed in a glasshouse nursery on tablets with a temperature of 23/20°C day/night and additional light.

About six weeks after sowing, the plants in the Rockwool blocks are placed on Rockwool bags at a distance of 50 cm in the row and 100 cm between the rows. The distance between rows can differ due to the substrate system used. The temperature in the greenhouse is kept  23/20°C day/night. The plants are grown along wires. Per plant two stems are maintained (indeterminate types). Plants are pruned weekly. The plants are grown in glasshouses free of pollinating insects. Consequently, it is not necessary to take precautions for uncontrolled pollination.
In case the plant gives predominantly male flowers it is possible to obtain female flowers by pruning. If pruning does not help, the plants can be sprayed with ethylene. Plants with only female flowers can produce male flowers after a treatment of the sprouts with 250-ppm silver nitrate. For seed production, so-called chain pollination is carried out by hand. Per accessions plant no. 1 is crossed with plant no. 2, plant no. 2 with plant no. 3, etc.

Fruits are harvested about 4 months after sowing at the physiological ripe fruit stage. This is much later than the marketing stage. Per plant the aim is to produce 2 to 4 ripe fruits which can be harvested. Fruits are harvested in several rounds when they are ripe and stored for at least a week before seed extraction.

During regeneration the plants are checked visually for diseases by the Dutch Plant Health Service. In case of doubt the plants are tested to determine the disease.  Infected plants are removed.