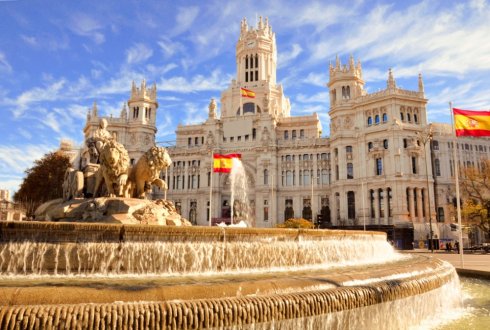 Next to the formal negotiations at the COP25 in Madrid between the government officials on the Paris rulebook, various organisations informed each other and the official delegations on their newest insights. WUR organised a session on ‘shaping climate smart food systems’ with Prof. Louise O. Fresco as keynote speaker.

Louise Fresco told her audience in a key note at a site-event of the 25th Conference of Parties of the United Nations Framework Convention on Climate Change (UNFCCC) that in general food is blamed too much in relation to the climate challenges we face. The audience agreed on the statement that agriculture is indeed a responsible party for deforestation, and a large part of emission of greenhouse gasses like methane and nitrous oxide. Fortunately, food is already moving away from being a problem creator to problems solver. The key challenge, however, for agriculture is adaptation. Short- and long-term response strategies to deal with the impacts of or exploit opportunities provided by climate change requires a flexible and schooled farmer and food producers community. The example of the Netherlands was provided where ‘less is more’ is the motto of a large group of farmers. They develop very efficient production systems where nutrients, water and other resources are used to the last drop. This new generation is active in combining both adaptation and mitigation in their management.

It is not only farmers that need to adapt to new conditions. Food waste is important as it causes huge losses of valuable resources. Up to 40% of food production is lost. Both at the level of consumers and throughout the food system, measures are required to prevent losses. Society and consumers are vital parts of the food system, and it is imperative there is understanding of the origins of and how food is produced. This will also help in accepting new technologies needed to increase the efficiency and flexibility food system require in adapting food systems to climate change.

The issue of meat is also discussed. Animals play an important role in the food system as not all land is able to produce food for human consumption. Animals are able to digest plants that are hardly digestible by humans, and the animals provide highly nutritious products. Places differ hugely worldwide, from massive overconsumption to protein shortages in other places. We need a more circular, moderate use of meat, fitting healthy lifestyles. In the Netherlands the minister issued a policy paper on circular agriculture. New methods to work on protein sources and from plants and processing them are promising, but do have major implications for land use that need to be taken into account.

There is definitely room for improvement, as several examples are discussed. Among others new breeding techniques that incorporate new climatic conditions and weather extremes, or improve the processes of photosynthesis; precision agriculture that improves overall efficiency and the placing of agro-chemicals; training of farmers and the new generation, making the farmer a more high-valued professional; technology from mobile phones to satellites and drones are to part of this fully integrated food system. It is time to get rid of disciplines and departments, as integrated solutions are urgently needed. Science need to work directly with farmers, learn from the problems they encounter, and face them together.

The IPCC land report is a good example of science policy interface, broadcasted throughout te world. Many people, and specially politician, often do not like the nuance of science. Specially on food emotion is part of the equation and trust in science and in food production and processing is not to be taken for granted. Organisations like The Global Alliance on Climate Smart Agriculture (GACSA) are devoted to matchmaking and building alliances. 2020 is a year of action for the global commission on adaptation, resulting in the Climate Adaptation summit in October in the Netherlands. An important stepping stone towards the Food systems Summit in 2021. Bringing in science for climate smart food systems, through a science-policy interface, is an important message for the food systems summit.

Next to the session on ‘Shaping Climate Smart Food Systems’ WUR colleagues were active in sessions on monitoring instruments like REDD+, deforestation, and Nature Based Solutions.