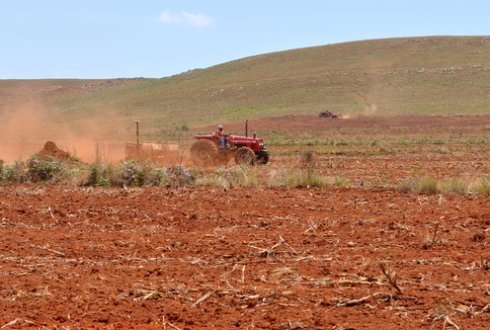 Exporting the 'circular' phosphate fertiliser struvite from the Netherlands to West African countries such as Senegal, Togo and Ivory Coast would contribute to a reduction of greenhouse emissions – and also appears to be financially feasible. “The cost price for producing and exporting struvite is lower than the price on the global market of conventional artificial fertiliser, and also has clear environmental benefits,” says Sander de Vries, expert in plant production systems at Wageningen University & Research.

In July 2017, a report on this research was published. “It would help the Netherlands deal with its mineral surplus, while also allowing small farmers in West Africa to achieve better yields.” The Netherlands imports large quantities of animal feed (mainly soy). The minerals from this feed end up in animal manure in amounts much greater than what the agricultural land and environment in the Netherlands can absorb. The manure surplus caused by intensive stock farming has long been an unresolved problem.

It is not technically difficult to reclaim phosphate from manure. Phosphate is especially present in the urine of cows and pigs, and humans produce considerable amounts of phosphate in their urine as well. More and more farmers, cooperatives and district water boards are therefore fermenting manure and faecal matter into energy-rich biogas. Via a simple precipitation reaction, the phosphate can be reclaimed from the remains as struvite. Struvite is an excellent slow-release fertiliser for grass and plants, as has been shown in tests on football pitches since 2008.

In the Netherlands, there is hardly any demand for struvite due to the manure surplus,” says Sander de Vries. At the same time, the demand for affordable phosphate fertilisers among small farmers in Africa is substantial, despite the presence of local phosphate mines. “Paradoxically, the phosphate extracted in Africa is exported and almost nothing ends up in the hands of small local farmers. Struvite from the Netherlands may help change this situation.”

According to De Vries, an analysis of the cost price of struvite, including transport to Africa, shows that it can be supplied to West African ports such as Dakar, Senegal, at a cost below the global market price of phosphate. The environmental balance is positive too. The greenhouse emissions from struvite are lower than those caused by mining phosphate fertiliser. “Moreover, the phosphate mines are slowly being exhausted and have a major impact on the environment, while phosphate fertiliser contains more heavy metals than struvite,” De Vries adds.

The authors of the study aim to encourage a debate on the secondary raw material for fertiliser. “We could set up a pilot project for this export in cooperation with district water boards, farmer organisations and NGOs like Fair Trade.” De Vries continues. Other initiatives are looking for a solution in developing decentralised sewage units where human excrement and animal manure is fermented. If these were to be placed in the slums of large cities in African countries, the poor population would have healthier living conditions thanks to more hygienic sanitation while also getting access to better water and biogas for cooking. And the struvite could be returned to the agricultural land.

Of course, one does not exclude the other, says Sander de Vries. “It may take a while before there are sufficient installations in place. In the meantime, the Dutch struvite can help farmers in Africa improve production. And perhaps it could provide a fundamental solution to the chronic manure surplus in the Netherlands.”