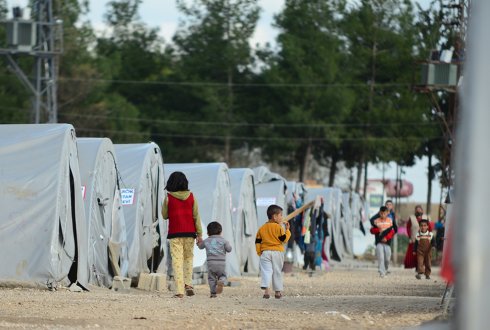 In refugee camps living conditions can be very poor. Previous experiences show that greenery and locational choice can make a difference. Metropolitan Solutions looks into the options to translate knowledge into applications for refugee camps.

Worldwide there are many refugee camps. The number of refugees and, as such, also the number and size of refugee camps, has increased significantly. The latest figures (UNHCR Mid Year Trends 2015) show that the number of refugees has increased from 10.4 mln (2011) to 15.1 mln (2015). The expectation is that the number of crises, due to conflicts and natural disasters, will not decline substantially in the upcoming decades, but rather increase. The refugee camps appear to be emerging urban environments, of which the aimed transience often moves into a long-term settlement. Settlements with populations often equal regular cities, varying from 25.000 to even more than 100.000 persons.

Many of these refugee camps are seen as transience settlement, planned according to clear principles. These principles are stated in the UNHCR Handbook (Handbook for Emergencies 3rd edition, UNHCR, 2007). The handbook only deals with relevant environmental aspects for location and layout of transience camps in a limited way and does not encompasses clear green-blue principles or measures. The consideration of environmental aspects are mostly focused on accessibility and suitability of the terrain, in terms of good access, the availability of water, good drainage and adequate conditions for sanitation, besides an impact assessment of the refugee camp on the existing environment.

The liveabilty is under pressure, because of the increasing population numbers and the environmental aspects (terrain and climate). Think about air quality (dust), water nuisance, heat (stress), but also the limited possibilities to provide fresh food, day-by-day activities and felt security.

The objective of the project is to see in which way can (temporary) green blue strategies and measures, based on Metropolitan Solutions, contribute to the strengthening of the liveability in refugee camps?