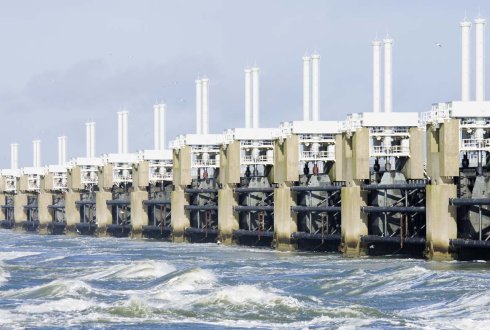 The impacts of climate change and salinisation on freshwater resources is starting to become noticeable in many parts of the world. However, it is still difficult to find public support to take precautionary measures (adaptation). Concerned policy makers and scientists in the Netherlands are increasingly posing questions as to whether current freshwater resources management and flood risk management are able to cope with climate change or whether alternative strategies are needed.

In 2007 the government installed a second delta commission. This commission formulated recommendations about flood risk reduction strategies and long-term freshwater supply for the coast and the low-lying part of the Netherlands. The government has responded to the Committion’s recommendations by announcing  the so-called Delta Programme (2009) along with an act (2011),  a commissioner (2010) and an investment fund (2011). Within the scope of the national Deltaprogramme the Rhine-Meuse-Scheldt estuary is important for national water management as a strategic freshwater reservoir (Haringvliet) and as a potential river discharge regulation (Lake Volkerak, Lake Grevelingen).

The water system is also important  as gateway to the ports of Antwerp and Rotterdam.  And, in addition, the estuary and its associated natural resources have a socio-economic value for agriculture, recreation, aquaculture and fisheries. The estuary is a refuge for several nationally highly valued species of both freshwater and saltwater ecosystems.

The ministry of Economic Affairs is responsible for the applied research to support policy making. Therefore a  knowledge broker was installed (this project). The objective of knowledge broker was to formulate (annually) a research agenda based upon the articulated knowledge questions by the policy makers within the Southwest Delta. The research agenda was in the first place used for communication with the ministry of Economic Affairs Agriculture and Innovation. This ministry is responsible for the budget for applied research to support the Delta Programme. The research agenda was also used to align the planning of research with the ministry of Infrastructure and Environment and research programmes such as Knowledge for Climate and Building with Nature.