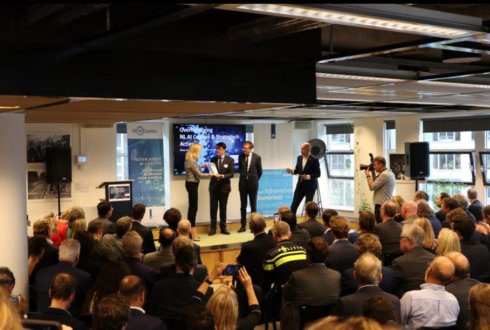 Artificial Intelligence (AI) plays a steadily increasing role in our economy and society. To showcase the Netherlands as an AI country, the Dutch AI Coalition (NLAIC) presented its agenda for action in The Hague on 8 October, the same day the Cabinet presented its AI Strategic Action Plan for the Netherlands. Wageningen University & Research contributions to the coalition will be focused on the AgriFood domain.

“AI will drastically change the world as we know it. With the Dutch AI Coalition we strive not to merely stand on the sidelines, but to, as the Netherlands, actively guide this process, to ensure that it will benefit and gain the trust of all Dutch people. We can only achieve this if we, as the government, work together with the business community, social organisations, and education,” says Focco Vijselaar of the Ministry of Economic Affairs and Climate and co-initiator of the coalition.

The Dutch AI Coalition asked WUR to participate in the AgriFood domain. WUR has been active in this area for a long time. Examples of its involvement include the Wageningen Data Competence Center (WDCC), the research programmes Digital Twins and Data Driven & High Tech, an extension of the Data Science in Education courses, and the recent new momentum in data science.

Similarly, the other participants in the coalition will contribute to their specific field of expertise. A number of areas in which the Netherlands can distinguish itself internationally were selected, such as the agricultural sector, healthcare, technological industry, and safety. This collaboration aims to stimulate more private and public funding. The coalition hopes to have over two billion euros available in the next seven years. This will fund about 400 additional researchers and new AI initiatives.

Action agenda and centre of excellence

The coalition drafted its action agenda with, at its core, the creation of an overarching national AI knowledge and innovation network, which will connect the different AI initiatives of businesses and research centres. Other items on the agenda include many actions aimed at human capital, research and innovation, sharing data, social acceptance and inclusion, and startups and scale-ups. Large-scale campaigns are also in development in order to raise awareness among employees and employers in small and medium-sized enterprises (SMEs) regarding the opportunities presented by AI, and to provide additional digital skills training.

The NLAIC is also working on a plan to attract the European centre of excellence for AI research to the Netherlands. This may boost the relatively strong starting position of the Netherlands and serve as a magnet for new talent and business.

The Dutch AI Coalition is an initiative of VNO-NCW MKB-Nederland, the Ministry of Economic Affairs and Climate (EZK), The Netherlands Organisation for Applied Scientific Research (TNO), Seedlink, Philips, Ahold Delhaize, IBM, and Topteam Dutch Digital Delta. Since its inception, over 65 businesses, government agencies, education and research institutions, and social organisations have joined the coalition, including Wageningen University & Research.