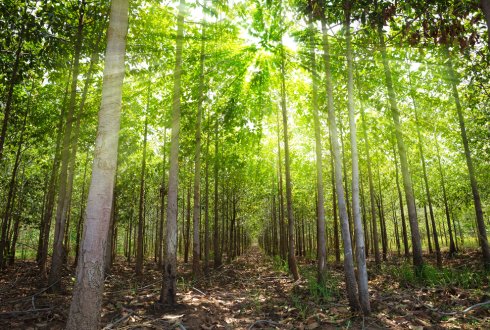 I studied the effects of climate change on the productivity of the Zambezi teak forests at the drier Sesheke, intermediate Namwala and wetter Kabompo sites in Zambia by integrating information from biomass measurements, tree-ring analysis and dynamic vegetation modelling (LPJ-GUESS). Evaporation had the highest influence on tree growth at all the three study sites compared to temperature and rainfall alone. LPJ-GUESS simulated annual net primary productivity (NPP) related positively with mean annual temperatures of current year, previous year and previous two years at all sites. NPP was projected to increase at Kabompo and Namwala caused by increased CO₂ concentration under RCP4.5 and RCP8.5, while at Sesheke, NPP would decrease by the end of 21st century under RCP8.5 caused by a combination of increased temperature and reduced rainfall. This distinct response indicates that differences in rainfall and temperature patterns influence the way in which the projected changes in climate and CO₂ will affect forests resources.