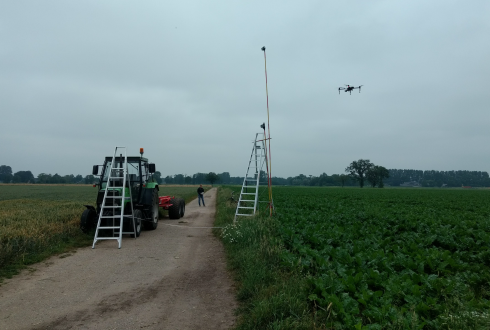 By Imke de Man (the Netherlands)

Abstract
This research investigates the possibility of monitoring air quality, more specifically NO2 emission plumes, with the use of an electro-chemical sensor mounted to an Unmanned Aerial Vehicle (UAV). The combination of an electro-chemical sensor and the UAV has been touched upon several times in literature, but is never experimented with in an outside situation. The aim of this research is to evaluate if this sensor mounted to a UAV is of good use in a real-life outside situation. Therefore first it is evaluated what was done before in literature. Next the system is tested outside in a real-life outdoor situation: it measured the emission of a tractor on two different days, with two different flight patterns, the zigzag pattern and the spiral pattern, on a height from 3m to 7m. Both days had a different wind speed. From the literature study it showed that more research can be conducted to the ideal sensor location on the UAV and the literature study showed that calibration of the sensors to correct for temperature and humidity is important. This calibration is experimented with in laboratory calibration as well as outside calibration. From the experiments it showed that wind has a significant effect on the measurements. The first day the wind speed was between the 0.0 m/s and 2.9 m/s, which resulted in a percentage of measurements measured above the background concentration (percentage M.A.B.) from 73.0% to 99.5%, while the second day with wind speeds between 2.1 m/s and 5.3 m/s had a result of 4.8% to 14.1%. The height of measuring and the influence of flight pattern had no significant effect on the percentage M.A.B. Therefore this research concludes that for the use of an NO2 sensor mounted to a UAV wind should be strongly taken into consideration. This effect of wind on gas plumes needs to be taken into account in the future by measuring gas on days with a low wind or by finding flight patterns that can deal with high wind speeds.