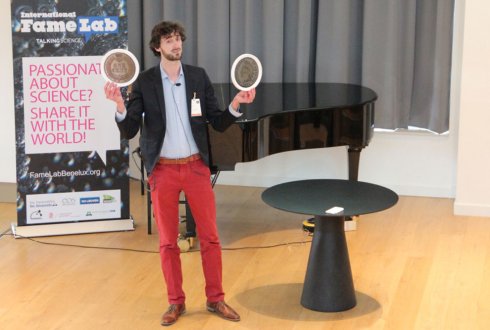 Communicating science to a lay audience is the objective of the Famelab Wageningen heat. About twenty young scientists, most of them Wageningen PhD candidates, give each a 3 minutes talk on their research without using PowerPoint. A jury will select the two best candidates, judging content, clarity and charisma. The audience is invited to listen, observe and probably ask a question to the candidates.

FameLab is an exciting competition to find the new faces of science in Wageningen, the Netherlands and even across the world. The competition format is similar to talent shows on TV. Contestants have just three minutes – in which absolute silence is required - to charm the audience and jury with clear scientific content. Jury members are Cathelijne Stoof, Vincent Koperdraat and Lisa Becking.

By doing so, they not only change the common stereotype of the scientist as ‘the geek in the white lab coat’, but also justify funding for their research, and inspire the next generation of scientists and engineers.

The two winners in Wageningen will get a two days masterclass at KNAW in Amsterdam, together with ten colleague Famelabbers from other universities in the Netherlands. They will have a final competition in Utrecht (Tivoli/Vredenburg) on May, 3. The national winner will be entitled to compete in the international Famelab final during the Cheltenham Festivals in England in June. The International Final brings together people from all over the world to share their passion for science.

The heats will be organised and hosted by six Dutch universities. Famelab is collaborating with the partners VSNU (Association of Universities in the Netherlands) and the Netherlands Royal Academy for Arts and Sciences (KNAW).

Wageningen has been participating in FameLab since the first national edition in 2014. In the first year the Wageningen winner, the plant scientist Pádraic Flood got to the international final and was chosen international champion.