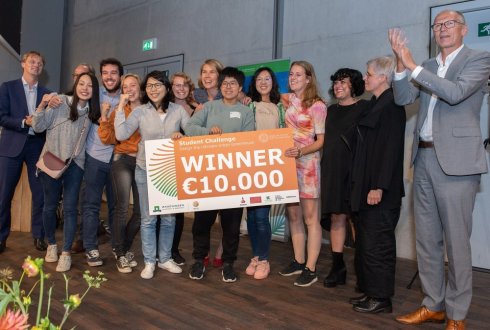 Save the Date: Grand Finale of the Rethink Protein Challenge on June 27th.

Are you interested in hearing about the latest innovations regarding the protein transition and feeding 9 billion people worldwide? Then do not forget to register for the Grand Finale of the Rethink Protein Challenge on June 27th.

During the Grand Finale, which will be held in the Waaierzaal in the Orion building, the 20 student teams that made it to the final round of the Rethink Protein Challenge will pitch their idea or prototype and compete with one another in front of a Grand Jury. The finalists have already been working on their innovative projects for months along with business partners and are eager to convince you of their potential breakthroughs in the protein transition.

Besides the pitches of the student teams, there will also be an Innovation Market at The Spot during which you can meet the finalist and business partners such as Syntega, The Greenery, Cargill, Vion Food Group and many more. During this Innovation Market, BNR Radio will be present to broadcast the event live. So aren’t you available the whole day? Be sure to pay a visit to the Innovation Market between 12.15 and 13.45!

After the Innovation Market, it is time for the final round, during which David Welch from The Good Food Institute will give a Keynote speech, and a panel discussion and the final battle will take place. The event will end with an Award Ceremony and celebrations with drinks and bites.

The Rethink Protein Challenge invited students to come up with an innovative business idea or prototype that offers a solution for feeding 9 billion people worldwide with sustainable, affordable and healthy proteins. Throughout the different phases of the challenge, student teams have received coaching from multiple business partners in order to further develop their projects.

During the Grand Finale, the 20 finalists compete for prize money between €500,- and €5.000,-, support from partners to further develop their idea or prototype, and a place in the ‘Dutch 4TU Impact Finals’, where the best student teams from the Technical Universities in the Netherlands will compete with one another.

We are looking forward to see you there. The full program of the grand finale can be found here.