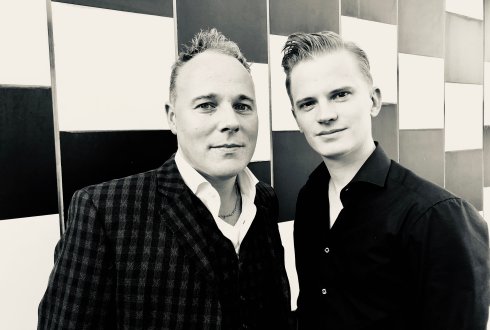 While making his last album "Spirit Control" in winter 2017, he got in touch for the first time with the young and talented Dutch trumpet player Teus Nobel.

A huge (positive!) surprise fell over him, as he noticed that Teus was of great value during the recording and composing process of several songs. After that collaboration, Jef even decided to take Teus with him on tour for the presentation of this last album, which resulted in an even closer relationship, both musically and as a friend.

After an invitation for a private show to perform as a duo a while ago, it became very obvious that they wanted to continue this duo, and present it on public stages, in Belgium, The Netherlands, and abroad.

The duo-project presents a mix of compositions by themselves, as well as some cool jazz standards, alternated with stories and chats by those two funny and verbally strong gentlemen. They never stop to challenge and tease each other on stage, so much fun to watch and listen to!