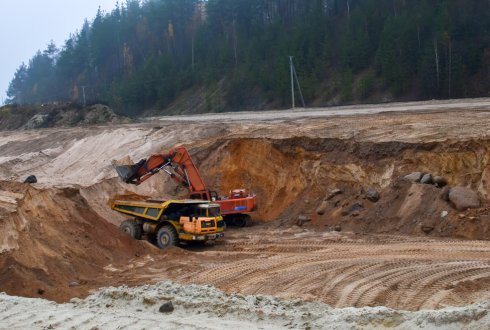 Our cities are made of sand—concrete, asphalt and glass. But, though the supply might seem endless, usable sand is a finite resource. The worldwide urbanization boom is devouring sand in unprecedented quantities: more than 40 billion tons every year.

The demand for sand is wreaking environmental havoc around the world, with riverbeds and beaches being stripped bare, ocean beds denuded, and landscapes devastated. Governments are cracking down in response, which in turn has spawned a worldwide black market in sand, complete with violent gangs battling for market share. In recent years, hundreds of people around the world have been imprisoned, tortured and murdered over sand.

Award-winning journalist Vince Beiser, author of The World in a Grain, gives an overview of those growing, but relatively unknown problems. How does the scarcity of sand affect us all?

Vince Beiser is an award-winning journalist and author based in Los Angeles. His book on the global sand crisis, ‘The World in a Grain’, is a finalist for a PEN/E.O. Wilson award.

Vince has reported from over 100 nations, states, provinces, emirates, kingdoms, occupied territories, liberated areas, no man’s lands and disaster zones. He has exposed conditions in California’s harshest prisons, trained with troops bound for Iraq, ridden with the first responders to disasters in Haiti and Nepal and hunted down other stories from around the world for publications including Wired, The Atlantic, Harper’s, The Guardian, The Nation, Mother Jones, Playboy, Rolling Stone, The Wall Street Journal, The Los Angeles Times, and The New York Times.

Vince’s work has been honored by Investigative Reporters and Editors, the Society of Professional Journalists, the American Society of Journalists and Authors, the Columbia, Medill and Missouri Graduate Schools of Journalism, the National Mental Health Association, the Association of Alternative Newsweeklies and many other institutions. He has twice been part of a team that won the National Magazine Award for General Excellence, the magazine industry’s highest honor, and shared in a Los Angeles-area Emmy award for his television reporting. He is also a grantee of the Pulitzer Center on Crisis Reporting.

Sand. Ordinary and incredibly diverse. Beautiful. Omnipresent and becoming scarce at the same time. In this theme week, Studium Generale explores the many aspects of this versatile material. What it looks like, how it sounds, how we source it, what you can do with it and, especially, its growing scarcity and the consequences this has.

Did you know that sand is the most consumed raw material on earth after fresh water? And that your smartphone wouldn’t exist without it? It is used for buildings, infrastructure, glass, computers, cosmetics and detergents – omnipresent things in our daily lives. With visions of deserts in your mind it might be hard to imagine, but did you ever realize that sand is a finite source, and actually becoming scarcer? And that the increasing pressure on this resource may have serious implications, ranging from sand conflicts and ecological destruction, to compromised food production and flood protection?

Delve into the everyday and at the same time unknown world of sand, and explore its special nature and role from various angles. Admire its beauty and diversity, and find out why sand has so many different uses. Discover where we get it from and how we extract it. Learn about the social and ecological effects of sand extraction, and discuss what role science and policy could play in promoting sustainable sand use.

Program flyer ‘The World Of Sand’

Series of events: The World of Sand