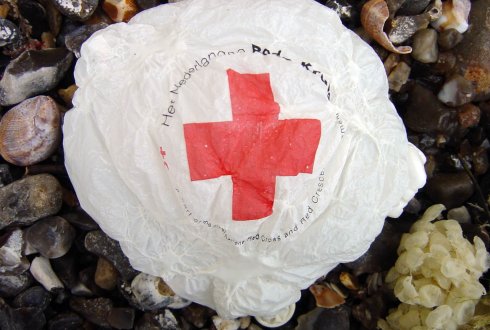 In early May 2007, a work visit of researchers of Wageningen Marine Research to French colleagues became quite embarrassing! Following Dutch Queen's Day celebrations, strong northeasterly winds brought a lot of Dutch party balloons all the way down to Normandy, at least 800km away from their point of release. In the vicinity of Le Havre, more than 10 balloons per kilometer coastline were recovered. Most originated from companies advertising their business. However, also charity organisations were involved, yet sending out the wrong message here.

Examples of Dutch balloons, beached in Normandy following Queen's Day in the Netherlands in 2007

In the Netherlands, balloon debris from neighbouring countries is also found: