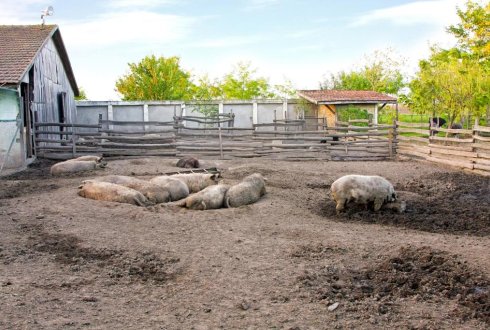 December 2016 - African Swine Fever (ASF) appears to be advancing towards the Netherlands. African Swine Fever primarily originated in sub-Saharan Africa. In recent years, however, there have been increasing reports of the disease in Eastern Europe.

African Swine Fever is a viral disease to which only pigs and wild boar are susceptible. After the initial infection, symptoms can take two to ten days to appear. Depending on the pathogenicity of the virus, 30% to 100% of the infected animals die.

Common symptoms include: loss of appetite, weakness, red skin, inflamed ocular mucous membranes, vomiting, bloody diarrhoea and fever. In addition, the skin may turn blue, areas of skin may die off (black stains) and haemorrhages may occur. Furthermore, the disease can cause spontaneous abortions in pregnant sows. Sudden death, without any prior noticeable symptoms, may also occur. The symptoms of ASF can resemble those of classical swine fever. The diseases, therefore, are difficult to distinguish from one another.

Pigs can survive the acute phase and appear to have recovered, only to become long-term carriers of the virus (from a few months to the entire lifespan), and thus excrete the virus again and infect other animals. The symptoms can also be recurring.

The virus spreads directly from animal to animal and indirectly through contaminated materials, biting flies and ticks (especially via a species of soft tick, Ornithodoros moubata, in which the virus multiplies). It is also easy for the virus to enter into the feed chain via food waste or offal from infected pigs. Attempts such as international measures and maintaining vigilance on pig farms are being made to prevent the further spread of the disease. Since 2007, there have been several outbreaks of ASF in Eastern Europe.

The first known outbreak of ASF outside of Africa was in 1957 in Portugal, when pigs near Lisbon were fed with waste from an airplane. Though this outbreak was almost certainly stamped out, there was a new outbreak in the same region in 1960. Until the mid 1990s, ASF was a constant presence on the Iberian Peninsula. Between 1964 and 1986, ASF also surfaced in other European countries (see Table 1). Since the first outbreak in 1978, ASF has not been stamped out in Sardinia, even though the disease was eradicated in other countries. In all that time, the virus did not spread from Sardinia to the mainland of Europe.

In June 2007, ASF was identified in Georgia, in the Caucasus region. The virus probably spread through the transport of contaminated pork from south-eastern Africa. Beginning in July 2007, the virus then spread to a large part of Georgia and the surrounding regions, such as Abkhazia and Armenia. Later that same year, ASF was also detected in wild boars in Chechnya, Russia. In 2008, there were still documented cases of ASF in Georgia and Armenia. The disease then spread to Azerbaijan, North Ossetia, located north of Georgia in Russia and then to Orenburg, Russia (1,000 km apart). African Swine Fever was still present in Russia at the end of 2016.

In 2010 and 2011, cases of ASF were once again detected in Armenia. The first outbreaks in the Ukraine were identified in 2012 and in 2013 in Belarus. Lithuania reported incidences of ASF in wild boar in January 2014. In 2014, the disease was subsequently detected in Poland in February, in Latvia in June and in Estonia in September. Analysis of the genetic background of the detected viruses confirmed that ASF has spread from Russia to these countries.

Since 2015-2016, ASF has maintained its presence and continues to spread throughout Russia, the Ukraine, Estonia, Latvia, Lithuania and eastern Poland. In addition, ASF was detected in 2016 in Moldova.
The EU and individual countries are employing preventive and control measures to prevent further spread of the disease and to eradicate the disease. In addition, pig farmers (and farm advisers and suppliers) are urgently advised to observe hygiene, to not feed waste to their animals (also banned in the Netherlands since 1986), to properly monitor their pigs and to take action when the animals show symptoms of ASF.

Subject to notification and control

Any suspected cases of ASF must be reported to the Dutch government (Netherlands Food and Consumer Product Safety Authority, NVWA). After confirming the diagnosis, the government is required by law to control the disease, as it is with classical swine fever. If pigs have died, but there is no immediate suspicion of ASF, there is an option - as part of an early warning system - to have a dissection carried out at the Animal Health Service (Gezondheidsdienst voor Dieren) or by a designated and approved veterinary practice. If the findings from the post-mortem dissection resemble ASF, the pathologist will report this suspicion to the NVWA.
Wageningen Bioveterinary Research has accredited tests to either confirm or rule out ASF. Even when there is a suspicion of classical swine fever, samples will always be tested for ASF because the symptoms of these diseases so closely resemble each other.