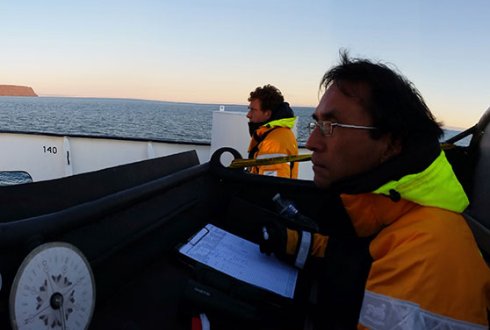 During the SEES expedition to Svalbard, almost continuously seabirds and marine mammals were counted from the box on the front deck of research vessel Ortelius. Researcher Steve Geelhoed reports in a blog how the counting is done.

A Northern Fulmar flew through our counting block of 300 x 300 m, during a snapshot count. We saw hundreds of this tubenose during the SEES-expedition, while sailing between West-Spitsbergen and Edgeoya. It was the most abundant species recorded during the survey Hans, Steve, Meike, Geert, Sophie, Roger and the occasional interested guest conducted. The bird box on the bow provided not only shelter against the elements but provided an endless supply of chocolate, candy and cookies as well.

As usual surveys were conducted conform the ESAS (European Seabirds At Sea) protocol, which is used by seabird researchers throughout the Atlantic. Seabirds and cetaceans are counted from a sailing vessel in a strip of 300 m. All birds and cetaceans in or on the water were counted. To account for ship movement flying birds were counted during so-called snapshots at 1-minute-intervals; for other flying birds only their presence was registered.

As usual behaviour was recorded as well. Though the behavioural codes have been used for decades, An interested guest managed to give one of the codes a new meaning; code 65 guarding chick. After his stint in the bird box we regularly saw him ‘guarding’ his wife. Father-chick combinations of Brunnichs Guillemot taught him the proper use of the code. As most Atlantic auks, downy guillemot chicks jump of their breeding ledge when they are a few weeks old. They try to glide far enough on their tiny wings to make a safe landing at sea. Some fail and crash at the beach, where scavengers like Great Skuas, Glaucous Gulls and Arctic Foxes wait for an easy meal. The chicks that make it to sea follow their father and swim away from their natal colony, away from predators. During the SEES expedition most chicks had already left the colonies. Less than expected were recorded during the survey.

Apparently the birds leave the areas around the colonies fast. Systematic surveys (further offshore) could shed light on the distribution of these chicks. In fact, offshore distribution of all seabirds and cetaceans is scantily quantified, whereas their spatial and temporal at sea distribution is important to understand their ecology and species’ plasticity.

During ‘regular’ surveys data are entered in the computer between sunset and sunrise. Impossible during this survey, as the sun never set. When the vessel was travelling at a speed of at least 10 knots, counting in the bird box was  continuous. Surveys were conducted along  833  km of transit, covering 250 km2 sea. To become more valuable more survey  data should be collected in the coming years. A comparison with survey data from 25 years ago published by Kees Camphuysen (SULA 7, special issue Birds and (marine) mammals in Svalbard, 1985-91) and data published by Fridtjof Mehlum could yield information on changes of species occurrence. Continuing ESAS surveys in Svalbard waters is a first step to make this possible.