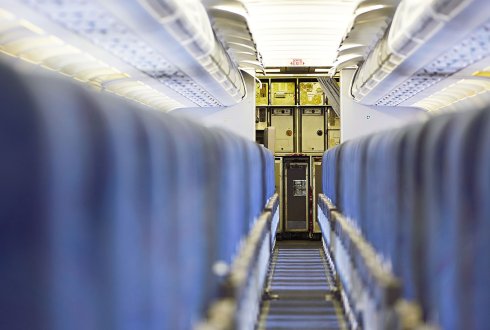 A free flight so consumers can properly sample airline meals? The time for these types of jaunts seems to be over. Wageningen researchers have shown that a taste test in a simulated environment works just as well and is certainly as efficient.

Manufacturers and caterers normally have new products assessed by testing panels. However, two-thirds of new food products disappear from the market again within one year. Consumers do not appreciate these products enough.

Consumers on the testing panel are given the product in a testing booth where they can sample a few bites of the product. The sweetest or saltiest option, namely the product with the strongest taste, often performs best in the taste test.

However, there is far more to taste. The physical and social environment also influences taste: an ice cream enjoyed on a sunny terrace tastes different to one eaten in the office. ‘The aspect of continued eating also plays a role: do you want to keep on eating the product or don’t you feel like it anymore after just a few bites? That is why it is good to carry out tests with whole portions,’ says Wageningen sensory researcher Nancy Holthuysen.

Although it is preferable to carry out taste research in real-life situations, this quickly becomes too expensive, time-consuming or complicated. A controlled setting that consumers experience as being ‘just like the real thing’ can then offer a solution.

Wageningen University & Research has demonstrated this with a study into airline meals. The researchers let consumers choose between a pasta meal and a rice meal. There were two variants of each meal, which were distributed randomly. The meals were tested in three situations: in a classic laboratory environment (the normal testing booths), in a simulated environment and on a flight to Tenerife.

A semi real-life environment was created in the test laboratory. ‘Just like on a plane, there were rows of aircraft seats close behind each other,’ explains the researcher Nancy Holthuysen. ‘Everyone had a boarding pass and hand luggage, and a stewardess helped them board and store their cases. An audio tape was then played with the standard safety instructions and normal sounds of an aircraft.’ The meals were served during the ‘flight’ from trolleys, with accompanying aircraft cutlery.

The main finding was that the appreciation of meals in the simulated situation corresponded far more closely to the actual flight than the traditional test in the laboratory. ‘The lower air pressure on a flight seems to have far less influence on taste than initially thought,’ says Holthuysen. An experience room in which real-life situations can be simulated could thus offer a good alternative, in terms of costs and organisation, to taste tests in real-life situations.

The research also clearly shows that the predictive value of taste research in testing booths is lower than in real or almost-real test environments. This provides options for increasing the probability of success of product introductions. ‘We can now recreate almost every situation down to the finest detail in our research facility,’ explains Holthuysen. ‘For example, we have also created a grand café for research into coffee. But this can just as well be turned into a living room, sport canteen or supermarket on request.’

Nancy Holthuysen works as a researcher at Wageningen Food & Biobased Research and specialises in taste research. ‘The research being conducted within Wageningen is very diverse. We investigate, for instance, which soup or yoghurt the target group enjoys the most, or how we can get children accustomed to the taste of vegetables so they eat more of them. And we also do a lot of research into products for senior citizens. This group needs more proteins, but new products have to be tasty otherwise no-one will eat them.’