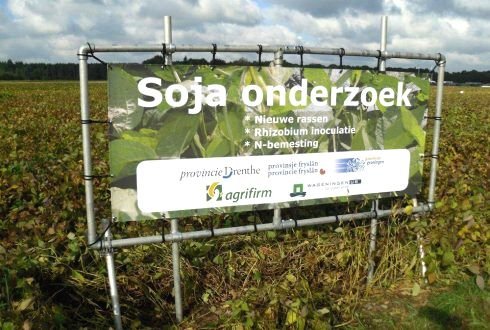 While the demand for locally grown produce is on the rise in the Netherlands, our country is still dependent on imports from North and South America for soya used to make soya beverages, tofu and baked goods. Wageningen researchers collaborated with a farm to demonstrate the potential of locally grown crops.

They are currently testing the growing potential of foreign, early-ripening crop varieties in Dutch clay soils and sandy soils and are working to increase yields and protein levels. This will help to generate insight into the potential of a national market for Dutch soya. Soya also happens to be a natural fertiliser, which is another way Wageningen is contributing to enhancing the quality of life.

Soya is a leguminous plant that forms bean-filled pods, similar to peas, field beans, alfalfa and lupins. The beans are high in protein (35-45%) and oil (1020%).
Leguminous plants have nitrogen-fixing nodules on their roots that enable them to bind to the symbiotic bacteria Rhizobium in the air. This is what makes the crop such an ideal fertiliser.
The only soya varieties that can be grown in the Netherlands are those that have been adapted to the Northwest European climate. These varieties have been available for several years and have not been genetically modified. Dutch soya is primarily used as an ingredient in food.

Soya is sown in late April to early May and harvested with a combine harvester in late September to early October. The crop ripens later in cool summers and earlier in warm summers. At the moment, Dutch soya bean cultivation is on par with that of summer grains. The yield of three tonnes per hectare is comparable and in some cases higher than that of Brazil, the United States and Canada.

The Wageningen research study on crop varieties and cultivation methods focuses on varieties with a protein content of 42%, which are harvest-ready in mid September and which produce a yield of 3.5 tonnes per hectare. 'The harvest weather is better at this time, which means the soya beans are drier,' says Chris de Visser of Wageningen University & Research. With a yield of 3.5 to 4 tonnes per hectare, soya and summer grains can compete with other crops, such as barley and winter wheat, and help expand the cultivation options.
Both the government and industry want to increase the soya bean acreage in the Netherlands to at least ten thousand hectares within the next few years. This ambition was documented in 'Green Deal Soya in the Netherlands'.