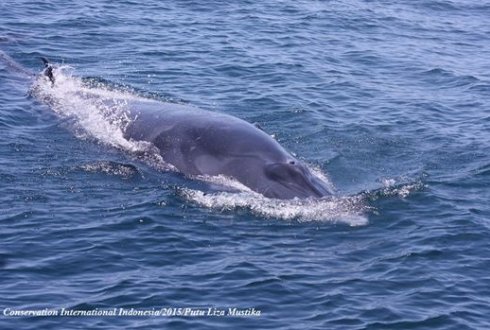 Coarse prediction of cetacean migratory routes and hotspots have been reported in Indonesia. However, such information is not useful enough when it comes to managing the more local habitats used by local government. Mapping of critical habitat as well as studying species distributions and their ecological determinants are crucial for the zoning of the area to enable and restrict certain uses and the degree of protection for cetacean species.

Indonesian waters are important for cetaceans, which is at least 33 species of whales and dolphins occur in Indonesia (Mustika et al., 2016), that account for 37% of the total of 89 species of cetaceans in the world (Jefferson et al., 2015). As one of the important top predators of the marine food chain, cetacean presence indicates a healthy marine environment, since without them the ecosystem will shift to alternative states (Alessi & Fiori, 2014; Hooker & Gerber, 2004; Wells et al., 2004). Cetaceans play a critical role in maintaining biodiverse ecosystems. As a sentinel species, protecting them through marine reserves could result in the protection of several other species in their ecosystem, thus covering a wider range of biodiversity in their protection (Hooker & Gerber, 2004; Sergio et al., 2008). However, several species of cetaceans are threatened due to their relatively slow growth and reproduction make their populations do not easily recover (Whitehead et al., 1997; Whitehead, 2002).

Although officially most of the cetacean species are protected by international and national regulations, in reality, they are not because their migration routes are hardly considered. With their broad migration across the oceans, cetaceans also encounter many risks. Understanding their critical habitats is important to support conservation goal. The cetacean habitats in Wakatobi National Park will be modelled using sighting data from former scientific surveys collected from 2004 to 2013.

In this study, to determine the ecological niche of bottlenose dolphin, spinner dolphin and sperm whale, Ecological Niche Factor Analysis (ENFA) or other relevant ecological niche methods will be applied to generate habitat suitability maps for the selected cetacean species.
Human marine resources use (shipping, fishing, tourism) will also be taken into account in the model. The method is also capable of performing descriptive statistical analysis and is GIS-based.

The result of the study will be used to give arguments for the recommendation for rezoning of current Marine Spatial Planning (MSP).