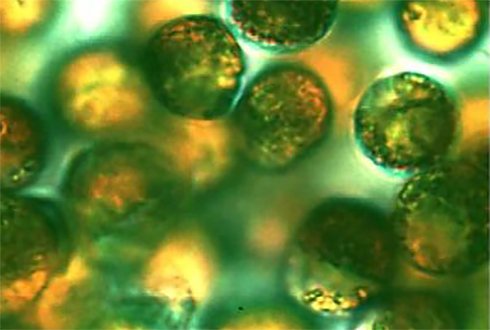 Wageningen UR scientists in renewable resource research recently published a report on the benefits to be gained from the application of products derived from micro-algae in crop production. International literature on micro-algae (both green algae and cyanobacteria) provides interesting insights into the state of the art and the potential and challenges for application as a biostimulant or for crop protection, growth enhancement, fertilisation and soil improvement. The literature also provides information about relevant aspects of legislation, environmental and economic perspectives, and the steps within the innovation process.

Algae species are also an important component of the soil. They influence its structure, and especially cyanobacteria fix nitrogen from the air in the soil. Although algae are best known for their effect in rice, positive effects from applying algae in arable crops such as maize and beans have also been found. In tomato, an effect of algae application on the quality and taste has been reported.

In the search for innovation in the world of crop production and crop protection, it seems that micro-algae are worth exploring.

Wageningen UR is involved in many projects related to both the industrial production of algae and the use of algae as a source for many applications, for example to improve agricultural production.