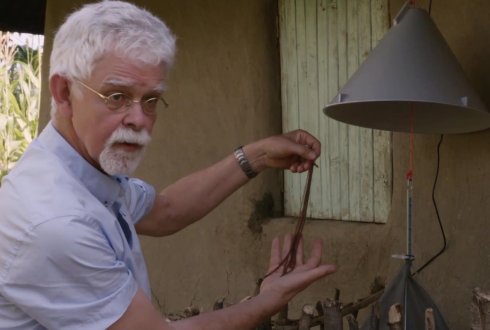 Do you have questions about SolarMal? Below you can find the frequently asked questions. Do you have another question? Adjust it directly to the researcher.

Questions and answers about Solarmal

1. How does the SolarMal mosquito trap work?

2. What is the advantage of this trap compared to other methods of Malaria eradication? What makes this approach effective?

The current method of combating malaria is a) to provide patients with medication (Coartem) as quickly as possible, b) to combat mosquitoes with a mosquito net treated with an insecticide that kills mosquitoes on contact and c) to spray the walls and ceilings of homes with an insecticide that remains active for six months.
But malaria parasites become resistant to the medication and mosquitoes become resistant to the insecticides. This causes a significant problem.
The odour-baited trap catches mosquitoes during their natural behaviour: in their search for blood. This is a completely different method than combating mosquitoes with insecticides and the mosquitoes cannot develop a resistance to the trap. Because the odour-baited trap works for several weeks and catches mosquitoes headed for a bedroom, the number of mosquitoes will reduce gradually, as an insufficient number of mosquitoes remain to produce offspring. The swift reduction of the mosquito population which, in turn, reduces the number of new malaria infections proves the trap's effectiveness.

3. The SolarMal mosquito trap was tested on an island. Will this trap also work on the mainland? And what about larger areas?

The island study was a pilot study the effect of mass trapping of mosquitoes. The study showed a reduction in malaria and mosquitoes. The widescale use of the mosquito trap will also result in a reduction of malaria on the mainland if the traps are used in a sufficiently large area. Mosquitoes will fly approximately 500 metres during their lifespan, thus the radius of the traps needs to cover a sufficiently large area. These traps can then be further rolled out to cover an increasingly larger area.

4. Can SolarMal also be used in other, large malaria areas such as South America or South-east Asia?

The odour-baited trap can be used anywhere in the world where malaria occurs. However, it is still not confirmed whether the chemical attractant works on all 450 species of Anopheles mosquitoes (malaria-carrying mosquitoes). In principle, the trap can be adjusted to specific regions or parts of the world.

5. Can other mosquito-borne diseases such as the Zika virus be eradicated with this method?

The yellow fever mosquito, Aedes aegypti, is attracted to the same chemical attractant that is used in SolarMal. Thus, this trap can be used to eradicate the Zika virus or the dengue virus.

6. What about ticks and the transmission of Borrelia or another new virus?

The mosquito traps cannot be used against ticks, which move by walking. This trap is only effective against flying insects such as mosquitoes and midges. However, ticks can be manipulated through odours and it would be possible to develop a trap for ticks.

7. What are some of the weaker points of SolarMal?

The effectiveness of SolarMal is dependent on the cooperation of the local population, just like any social medical intervention programme. In the case of SolarMal, this has proven a success. The biggest issue faced by SolarMal is the availability of financial resources to roll out a) the trap and its energy systems and b) the distribution of traps, solar panels and other necessities. Herein lie opportunities for entrepreneurs with experience in economically underdeveloped regions to introduce a new method of disease prevention to the population at an economically viable price.

8. Are there currently any other methods for malaria eradication that are showing promise and are there similarities between these and the scent trap?

Due to the increased resistance to insecticides, methods based on the use of insecticides, such as mosquito nets and indoor residual spraying, have become less reliable.

New methods currently being researched are:
a) Biological control of mosquito larvae. The natural biocide, Bacillus thuringiensis israelensis (Bti), destroys mosquito larvae in the water and is not harmful to the environment.
This method has proven to be effective.

b) Structural adjustment of homes, so that mosquitoes can no longer fly indoors. Mosquito screens can be placed in front of ventilation openings and windows and can be treated with a mosquito repellent.

c) Repelling and catching mosquitoes (push/pull): volatile mosquito repellents repel mosquitoes who are then attracted to odour-baited traps. The SolarMal project has captured mosquitoes, which has led to a sharp reduction in malaria infections and has prevented new infections.

9. Can the mosquito trap be implemented on a larger scale and how can this be done? Who will fund such a roll-out?

An official publication listing the successes of SolarMal in The Lancet would be the first significant step in scaling up the SolarMal malaria eradication system. We need people in the public health sector to understand and identify the significance of this method and to generate funds for its further implementation.
This is likely to be funded by parties interested in public-private partnerships. The costs associated with this project are fairly low at just €10 per person per year. The result is a decreased mortality rate for children and young women and fewer people infected with the disease. This will have a significant economic advantage. With upscaling, costs can be lowered even further.

10. Can malaria be completely eradicated with this method?

WHO and the Bill & Melinda Gates Foundation are striving to completely eliminate malaria by 2050. But many obstacles must still be overcome before this can be achieved. The SolarMal odour-baited trap, if applied at a large scale, will sharply reduce infections and eventually eliminate malaria at local levels. But malaria elimination can only be achieved with a combination of various methods that are dependent on local climate and socio-economic situations.

11. Can Anopheles mosquitoes be completely eradicated?

No, Anopheles mosquitoes cannot be eradicated. More than 450 species of Anopheles mosquitoes have been identified and in certain areas, multiple species are active. Because these mosquitoes have spread over significantly large areas, and Anopheles gambiae can be found across the entire African continent, their complete eradication is impossible. But mosquito eradication is also not necessary: in endemic regions, the mosquito population needs to be suppressed for long enough until all carriers of the malaria parasite are free of malria and new transmissions are eliminated. This is what has happened in Europe, and malaria is no longer present on the continent. The mosquitoes are still present but malaria has been eradicated. This is what we want to achieve in Africa, South America and Asia.

Do you have another question? Feel free to contact the researcher!