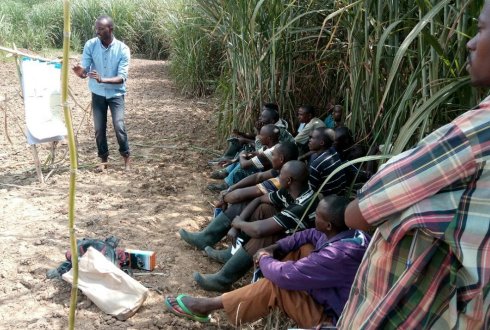 Sugarcane growers in Rwanda have more work and higher incomes since they got organised and work more effectively with the sugar factory. They maintain the drainage ditches, have improved their cultivation techniques and got together with fellow farmers to buy a delivery truck. The improvements stem from the farmers themselves, through social innovation.

Sugarcane growers in the Nyabarongo valley in Rwanda are proud of their shiny new truck. They can earn extra money with it. The sugar factory pays more for sugarcane that is delivered to its door in Kabuye. A truck is beyond the means of a single farmer, which is why a group of them got together and applied – successfully – for a loan from the bank.

This is one of the results of the Sugar: make it work project, explains Ted Schrader of Wageningen Centre for Development Innovation, which provided support in the form of preparatory research, coaching and training to the farmers’ organisation and other value chain representatives. The project is a public private partnership between sugarcane growers, the Kabuye sugar works, the ministry of agriculture and local government. The most important part of the project was draining the swamp which made a large amount of land available for the factory’s own plantations and also for 3000 farmers who supply sugarcane to the factory. The sugar factory invested four million euros in the project, which ran from 2014 to 2018, and the Dutch government matched this amount.

During this time the farmers became better organised. ‘That’s social innovation,’ says Schrader. ‘Farmers have been able to achieve much more by working better among themselves and with the factory.’ Jean Marie Ntakirutimana, the project coordinator of Sugar: make it work in Rwanda, played an important role. ‘He gained the farmers’ trust by working together with them rather than positioning himself above them,’ recounts Schrader. Ntakirutimana followed the three-week training course 'Organising farmers as partners in agribusiness' at WCDI in Wageningen. He helped the farmers set up a farmers’ organisation, which enabled them to apply for a joint loan for the truck. Functioning as an organisation also put them in a stronger position during price negotiations with the sugar works. Farmers and factory also joined forces to discuss road maintenance with the government. A deal emerged: the government would maintain the main roads better, if the farmers and factory took care of the access roads.

For the drainage to work it was crucial that the farmers kept the ditches clean themselves. ‘At the start, neither the government nor the sugar works believed the farmers would do so. But they did, and that built trust.’ Trust is at the core of social innovation, Schrader sums up, because without trust it's impossible to work together well. ‘It’s like football: players all have a role in the team, they have to look for each other and pass the ball. It’s about winning as a team.’

To make social innovation from the bottom up possible, as the sugar growers did, you need an open attitude, says Schrader. ‘You mustn’t be a prisoner of your own culture and worldview. You need to be open to other approaches and ideas.’ In the development cooperation world, farmers and workers are still not included enough in project inception or implementation, Schrader believes. ‘The same ‘poor' who are the ‘target group’ in projects are often not taken seriously. There is still a lot of arrogance among westerners, and this prevents them from being open to an alternative vision.’ Schrader did things differently: he shared the results of the preparatory study with the farmers so they could have a say in what the project’s goals and activities would be.