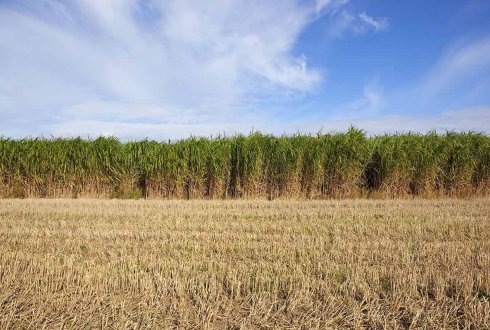 Although miscanthus has received more than one rave review as an environmentally friendly ‘supercrop’, converting it into a wide range of high-quality products – such as clothing, bioconcrete and bioplastic – in an economically viable way requires a better knowledge of this crop and its biomass properties. Recent research has provided insight into the cultivation options for different miscanthus types in various European cultivation areas

Miscanthus is a giant grass originated from Asia and it was originally introduced in Europe as an ornamental grass with similarities to reed and bamboo. It appears to have everything needed for cultivation for a wide range of applications: miscanthus grows in very diverse conditions, has high biomass yields , requires few cultivation handlings (from first year on it is (almost) only harvesting), and miscanthus is very efficient in the use of natural resources, as at the end of the cycle it remobilises the nutrients to the roots which will then be reused in the new growing season. The latter property is highly beneficial as it means the crop needs very little fertilisation. Promising and partially high-quality applications of miscanthus include fibres to replace cotton in clothing, paper, animal feed, packaging material, raw material for bioplastics and biofuels.

Great Britain now has some 15,000 hectares of mainly Miscanthus giganteus – a sterile species. Although production in The Netherlands is still small-scale, it is only a matter of time before the variety is grown on a larger scale. “Miscanthus is a good source of fibres for biobased applications, but the value of the biomass is relatively low,” says Luisa Trindade, Biobased Economy group leader in breeding research at Wageningen University & Research. “To explore the full potential of miscanthus and develop better varieties, we need a better knowledge of breeding aspects of this crop.”

Trindade performed two studies that aimed to understand the behaviour of the crop in different environments and create tools for miscanthus breeding. The first study evaluated the performance of miscanthus in six different countries in Europe, including The Netherlands, Turkey and Russia where 15 miscanthus genotypes were monitored in a multi-year study. Miscanthus responded well to cold, showing that it can also be cultivated on high latitudes. The yield varied per location and per variety; some varieties performed reasonably well everywhere and generated a high yield of consistent quality. Trindade: “I was impressed by the great potential of the WUR collection of miscanthus, and the potential of the miscanthus family as a whole.”

The research provided insight into which genotypesof miscanthus could be used for breeding high yielding varieties with good biomass quality. “Determining what is optimal depends on the cultivation goal. For many applications, such as building blocks for bioplastics, the biomass should contain high amounts of cellulose and low amounts of lignin. Lignin is difficult to break down and requires a lot of energy in the process.”

Breeding lignin-poor crops also has a downside: lignin provides strength, and strength ensures that a plant remains upright and grows higher until harvesting. This can be resolved by replacing the lignin function in the crop with more branched hemicellulose. The ideal miscanthus has lots of biomass, low levels of lignin and a high level of hemicellulose to ensure it can grow tall.

In the second study the focus was on the quality of biomass(e.g. low in lignin, high in hemicellulose) for. Wageningen used the Miscanthus sinensis as a starting point, as it already has very good properties: the variety grows closely together, requiring little weed control. The scientists studied which regions in the genome of Miscanthus sinensis were responsible for yield and biomass quality. As a result, Trindade now knows which genes are associated with interesting traits, and which varieties in the collection are optimal for breeding. “We are now working on producing seeds of a new variety which will be tested throughout Europe in a new EU project called GRACE.”