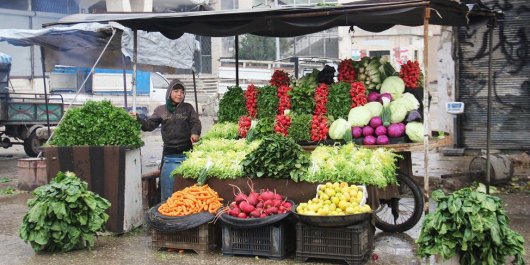 This blog post is part of our new series of Dutch blog posts on important issues from the field of environmental policy on NRC online.

You can find the original post (in Dutch) here.

As soon as a scientific article appears in which a link is made between a conflict and climate change, it’s followed by an article undermining that view. Ingrid Boas advocates a little nuancing.

A heated debate between climate change and conflict is raging once again. This time it’s about Syria. The debate was unleased by an article in an esteemed magazine written by Collin Kelley and four other scientists in which they claimed to have proof that climate change had led to a serious drought in Syria.

As a result of the drought 1.5 million people had moved from agrarian areas to the city in search of work. The ensuing bustle and competition for jobs in the city are said to have led to the unrest that incited the conflict. The media had a field day, but criticism from the science sector soon followed. Many climate migration scientists, including myself, were surprised and indignant when this article was published. For a number of years now, a lot of attention has been given to the complex reality of migration and its causes and consequences. This article nonchalantly skipped over these with the simple announcement that the drought migration in Syria was a catalysing factor in creating the conflict.

In response to this article, there is now an article by Jan Salby and three colleagues from various universities, including the renown climate scientists Mike Hulme. They have tried to completely refute the climate-conflict-migration thesis in Syria by focusing on the articles that first advanced this argument.

The core arguments are that, up to now, there is no reliable proof that climate change was a factor in causing the drought in northeast Syria, that the drought didn’t affect all of Syria and that it didn’t last as long as is often suggested.

In addition, they show that the estimate of 1.5 million people is based on erroneous statistics and that considerably fewer people than indicated migrated because of the drought. Moreover, they state that it is unlikely that the drought migration contributed to the start of the civil war. They supported this last statement with 32 interviews with Syrian refugees from the Syrian city of Dara’a. These interviews indicated that the migrants from rural areas had no active role in the protests.

Hurray! – I was expecting to think when I started to read their publication. I was happy with these counterarguments. Although, in my opinion, they too had exaggerated. By taking the other stance so firmly, they polarised the debate without giving any more insight into what actually happened. Did the proponents of the climate-migration-conflict theory simply invent it all?

I had hoped for more debate, interaction between the two perspectives, insight into the diverse causes and consequences of migration. Not this yes versus no game. For example, they didn’t speak with the rural migrants themselves. The fact that the migrants didn’t participate in the protests doesn’t counter the argument that the migrants could have been a source of unrest. Without interviews with this group, there’s little insight into what these migrants experienced.

It’s a sort of ritual dance. Ever since the 1990s, the relationship between war and the environment has received a lot of attention in science. Every time a possible case comes along, the discussion reopens without ever being resolved.

This was true a number of years ago with regard to the conflict in Darfur. The United Nations thought that this was a conflict created by drought. In response, an enormous number of articles was published. One entitled ‘Warming increases the risk of civil war in Africa’, and, as a response, another entitled ‘Climate not to blame for African civil wars’.

Francesca de Châtel has shown that there’s another option. She places the drought in Syria in a wider context: from economic liberalisation and the ensuing poverty (e.g. an abrupt end to fuel subsidies had dramatic consequences for farmers), the prolonged mismanagement of natural resources and failure of the government to deal with this. She analyses these factors and their relations in detail and thus adds more depth to the debate rather than polarising it.

This article by Francesca de Châtel was published in 2014, but it never received the amount of attention in the media and beyond as the articles mentioned above did. Evidently, depth is less exciting than absolute statements.