Already in December 2018 I had booked a short holiday to the island Schiermonnikoog for the period 14-18 January. That became a remarkable visit after the 1st of January 2019. In the stormy night of 1 to 2 January 2019, the container vessel MSC Zoe lost no less than 291 containers in the shipping lane just north of the Dutch Wadden Sea Islands. 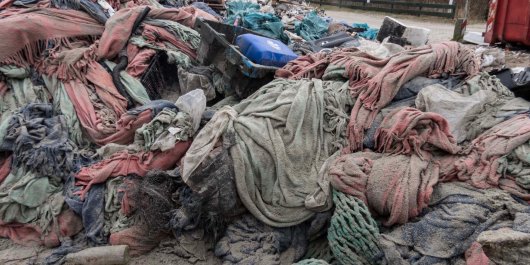 The days after the incident newspaper and television media paid lots of attention to the massive amounts of rubbish, and some complete containers, washing ashore. Beachcombers on the island faced ‘competition’ from masses of volunteers and military that arrived to help clean up the beached litter, and large equipment was brought in to remove  beached containers.

The beach on January 15

A first beach walk on January 15 showed no evidence of the container incident (photo 1). That is, almost no evidence, because a closer look at small items in a higher tideline showed the fresh industrial pellets that had been reported as part of the contents of one of the containers. But between those pellets there were also many lumps of paraffin or palmfat like materials (photos 2 and 2a). High densities of these fatty substances in lower tidelines indicated substantial strandings of this type of material had been lost at sea after the container incident, in whitish and yellowish colours (photo 3). The loss of the containers is a remarkable but uncommon accident, whereas discharges of paraffin and palmoil are a permanent, chronic problem in our part of the North Sea.

Over a distance of about three kilometers of wind battered beach, we found fresh corpses of three Northern Fulmars (photos 4 and 5) and two Common Guillemots. For fulmars especially such density is highly unusual. It is not very likely that the mortalities of these seabirds were linked to the Zoe container accident. These seabirds and certainly the fulmars usually reside north of the shipping lane where the accident occurred. More likely they are victims from exhaustion after long periods of heavy weather during December, with western to northern wind directions driving them to the Dutch coast.  But the birds have been collected and will be investigated on potential links with the container incident.

Only at a distant beach entrance, the container accident became highly evident. Two large waste containers that had already been loaded and covered were accompanied by a still impressive hump of container items collected from the beaches (photos 6 and 7). Shoes, chairs, cushions, blankets, toys, soap dispersers, strings of Christmas lights, LED-lightbulbs etc. were the contents of containers lost and damaged near this island (photos 9,10,11). There was no trace of common finds from other islands, such as LED Televisions or ‘My Little Pony’ toys. Each island has received its own characteristic litter depending on which containers had lost their contents near the coast. What we did find in the hump of debris on Schiermonnikoog were massive amounts of the industrial granules, alsmost covered in sand (photo 12). With some effort we also found examples of the original packaging: bags of 25kg HDPE pellets, made in Korea (photo 13)!

Two days later also the remaining hump of debris had been cleaned and removed from this beach entrance. Only small objects, like the industrial pellets, reminded of the earlier accident. Whether this is really the end of it for the beach of Schiermonnikoog is hard to tell. Possibly during the gradual removal of containers from the shipping lane, some may break open and loose contents. And who knows what is still at the seafloor. Fishermen from the area report that locally still lots of litter covers the bottom. The visitor centre of the National Park Schiermonnikoog has installed a large table with characteristic bits of litter found (photo 14), and will be a longer term reminder of the accident. That seems like an excellent initiative, because in spite of a beach that appears to be clean, we should not forget these types of accidents.