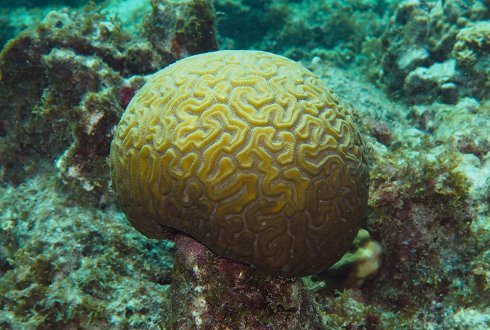 The coral reef around Bonaire is known to be one of the healthiest in the Caribbean. However, new research by Wageningen Marine Research shows that a large part of these reefs is not in good shape: most of the shallow parts are hardly growing and in some cases they are even eroding away. The researchers found a negative correlation between local human activity and the growth capacity of the reef.

Coral reefs around the world are under pressure. The Caribbean reefs in particular have seen large scale ecological degradation in recent decades due to various factors, including the warming of seawater, deteriorated water quality, pathogens and acidification. Didier de Bakker of Wageningen Marine Research (WMR) and fellow researchers Erik Meesters (WMR), Fleur van Duyl (NIOZ) and Chris Perry (Exeter University) studied the vertical growth capacity of the reefs around Bonaire and published their findings in the scientific journal Global Change Biology.

De Bakker calculated the growth rate of reefs based on growth factors (coral, haptophytes, sand input) and degradation factors (erosion due to factors such as sponges, parrotfish and wave motion). His calculations paint a worrying picture: in most places, the growth rate is low or even negative. Only a small part of the reef is able to keep up with sea level rise.

Consequences for man and nature

The consequences of this development for man and nature could be significant. The growth of corals on a healthy reef creates a complex 3-dimensional structure through the deposition of large quantities of limestone. As a consequence of the reduced growth rate and increased erosion, this physical structure is disappearing, which in turn causes the loss of biodiversity and endangers the functioning of the reef.

Furthermore, the risk of flooding on Bonaire may increase, as reefs with intricate structure form a natural protective barrier of low-lying coastal areas. In recent years, there have already been more frequent floods in the lower-situated southern part, which includes the capital Kralendijk. Finally, De Bakker points out that his research results likely do not bode well for other Caribbean coral reefs because most of the reefs in the area are actually in a worse ecological state than those around Bonaire.

An important additional finding of the research is that local human disturbance appears to have a major influence on the state of the adjacent reef. In locations with considerable human activity, such as around Kralendijk, the salt evaporation ponds and the oil storage tanks, the reef appears to hardly grow or even erode away. At the same time, the reefs in the marine reserves, to which access is strictly prohibited, are relatively healthy. This wide variation in growth rate within one reef system has not previously been so accurately linked to human land-bound activity.

This implies that acting on a local scale can be vital, according to De Bakker: “The well-developed reefs in the marine reserves, with rich coral cover, complex structure and high fish abundance, show that healthy reefs are indeed able to survive under the current global climate conditions. But this is only the case if the influence from the adjacent coastal region (from run-off, sewage, etc.) is minimised.” By taking the right measures at the local level, the reef might get a renewed opportunity to grow.