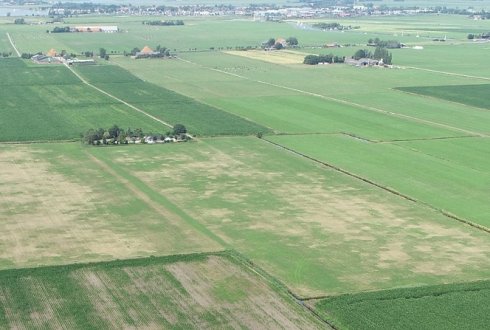 Large parts in the southern areas of the Province of Friesland look like a prairie landscape and that is not caused by drought. The peat grazing areas have been hit by a mice plague. The damage caused is such, that it shows on satellite images of Groenmonitor.nl. The mice pest arrived two months earlier than it did five years ago, when an outbreak also occurred. Farmers are conscious of the problem and are taking countermeasures.

The mice pest is occurring in the peatland meadows of the south of Friesland. Especially in and around Hommerts, Terzool, Indijk, Tjerkgaast and Follega, the damage caused by mice is identified as light dots in the green grass. Large mice colonies dig holes right beneath the turf and from there they will eat the grass away completely. The spotted pattern in grass meadows typifies damage caused by mice. Drone images clearly show a blotted structure of affected grasslands.

Not for the first time, but sooner than ever

Mice infestation on this scale did occur earlier, both in 2004 and in 2014. Favourable conditions, like a mild winter followed by a warm and dry springtime can make a mice population explode. The pest of this year appears, as a matter of fact, two months earlier than the one of 2014. And that is a worrisome aspect, says Gerbert Roerink, researcher at Wageningen Environmental Research. “Before, we saw the first damage patterns in September. The mice infestation of five years ago caused damage to 26,000 hectare of grassland with the pest continuing into the winter. While this pest appeared two months earlier, there is a big chance on far more damage now.”

Damage caused by the mice is visible in detail south of Hommerts. What is striking here, is that some plots have a lot of damage, but adjacent plots look hardly hit. The green, not-affected plots have been flooded by farmers as a way of combating the mice pest, a method that is called inundation. “This seems to be very effective”, Gerard Roerink comments. “The burrows are flooded and mice flee to the surface, where seagulls are on the lookout for them. However, as soon as the inundated field will have dried up, the mice will return. A joint approach on an area level could yield a sustained result, ” Gerard Roerink points out. “Every few years, the mice infestation appears to be a new reality for these farmers to reckon with.”