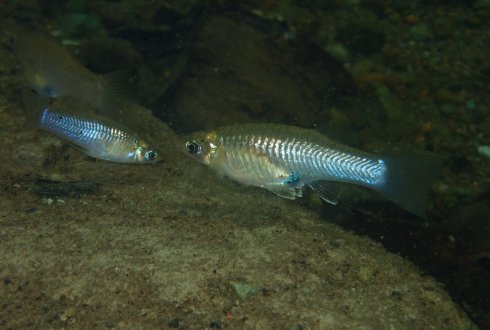 An international team of scientists, led by assistant professor Bart Pollux from Wageningen University & Research, showed that predators are driving the evolution of more complex placentas in fish. They studied populations of the live-bearing and placental freshwater fish Poeciliopsis retropinna in Costa Rica and published their results in the scientific journal Ecology Letters.

The study of the international team shows that fish from high predation populations have more complex placentas and a lower reproductive burden during pregnancy. The scientist studied populations with and without predators, while maintaining the same environment in both groups. Only the predation risk was different between the two groups. “More importantly, our study included different predator communities and we found the same increase in level of placenta complexity regardless of the type (or combination) of predator(s)”, Hagmayer explains. “This clearly suggests that placental complexity conveys a selective advantage to females in high predation environments.”

Environments where females need to be flexible

In an earlier publication, Pollux and colleagues argued that the evolution of the placenta should coincide with a temporal shift in maternal provisioning from before fertilisation (in non-placental species) to after fertilisation during pregnancy in placental species. “This should lead to a lower reproductive burden and likely an improved swimming performance of females during pregnancy”, explains PhD student and first author Andres Hagmayer. “If true, then the placenta is most likely to evolve in ‘performance-demanding environments’, where females need to be flexible and swim fast to survive, such as environments with high predation risk”, says Hagmayer.

To test the evolutionary hypothesis, the researchers studied 28 populations of a placental fish species called Poeciliopsis retropinna which lives in Costa Rican streams and rivers and is locally known as ‘Olomina’. In about half of these populations large predatory fish species were present that ate the placental fish, the other half of the populations were free of predators. The scientists collected females from these populations to quantify and compare their level of placentation (a measure for placental complexity). “This proved more difficult than initially expected”, says Andrew Furness from Hull University in the UK and co-author on the paper. “These fish were very elusive and we had to come up with different ways to catch them, including capturing them at night when they were asleep.”

The placenta is a complex, temporary organ that plays a crucial role during embryo development. It provides oxygen and nutrients to the unborn baby and removes waste products from the baby's blood. Placentas evolved many times in the animal kingdom and are not only found in mammals, but also in reptiles, amphibians and fish.

The research has been funded by the Dutch Science Council, NWO, by a VIDI grant for Bart Pollux.