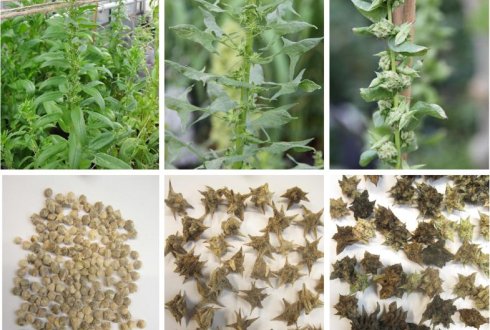 A large number of papers about spinach have been combined into a paper about the history of spinach. The paper, which was published in the journal Euphytica in February 2020, gives an overview from the domestication of spinach to current cultivars, as well as future perspectives.

Spinach is an important nutritious food crop due to its richness in mineral elements and vitamins. Spinach is an economically important crop, cultivated around the world. Despite the economical and nutritional importance of spinach, knowledge about the crop’s history is rather limited and fragmented.

In order to gather this information, researchers from Plant Breeding and the Centre for Genetic Resources, The Netherlands (CGN) of Wageningen University & Research have reviewed data from over 140 publications and combined it into a paper titled: ‘A review on the genetic resources, domestication and breeding history of spinach (Spinacia oleracea L.)’. The authors provide an overview of the available literature regarding related wild species, the domestication process and the breeding history of spinach. In addition, they summarise recent developments regarding the availability of genetic resources, resistance breeding and comparative genomics research, and provide recommendations for further research.

In the paper, the authors describe the supposed origins of spinach in former Persia, the morphological changes that took place during the domestication process and the presumed migration routes in the distribution of spinach to other parts of the world. In order to provide more certainty regarding migration routes, the paper recommends additional research into its relation to landraces originating from alternative routes.

A timeline displays milestones in the history of spinach breeding from 1500 onwards. The ancestries of spiny-seeded and smooth-seeded cultivars are constructed up until the middle of last century.

The paper provides an overview of diseases and pests relevant to spinach cultivation and the research that was carried out on resistance and tolerance to diseases and pests. A point of attention is downy mildew since this fungal-like disease can be disastrous for spinach cultivation. Downy mildew frequently develops new races, which is why studies on resistance are frequently conducted, both in the present and the past. A new procedure seems promising in developing durable resistance to this disease. During this approach, the genes associated with downy mildew susceptibility are silenced, which can lead to resistance.

Spinach has been investigated for its tolerance to abiotic stress factors that may play a part in its cultivation, such as high salinity, temperature and low nitrogen availability. However, the authors conclude that the available literature on this topic is rather scarce. More research on abiotic stress tolerance is recommended, especially considering the expected effects of climate change on agriculture.

In the paper, the authors provide an overview of the number of accessions that are stored in gene bank collections. Notable was the poor representation of wild relatives S. turkestanica and S. tetrandra, which are of large interest to the breeding industry as source material for useful traits. Collecting expeditions have been carried out by CGN in the regions of origin, which yielded 148 accessions that have been included in the CGN collection. The authors recommend introducing accessions from regions that have been unexplored thus far.