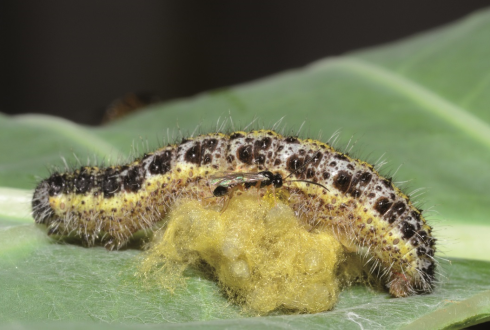 Viruses in parasitic wasps – which are used in biological pest control of the caterpillars of cabbage butterflies – protect the wasp larvae against the immune system of the caterpillars and consequently the plants against the caterpillars. Moreover, the viruses also betray the wasps to predators. In other words, this virus has the potential to make the development and application of biological control more complicated. Scientists from Wageningen University & Research have published the relevant findings in the Proceedings of the National Academy of Sciences today.

Like humans, insects are continuously affected by various micro-organisms such as viruses and bacteria. Some of these micro-organisms are beneficial for the insects, just like our gut bacteria, while others make them sick. But things can get much more complicated: there are also micro-organisms that affect the lives and well-being of the insects in unique and indirect ways.

Scientists from Wageningen University & Research study parasitic wasps because they can be used to make pest control in agriculture more sustainable. They lay eggs in caterpillars of pests such as cabbage butterflies, which are then eaten by the larvae. This sustainable alternative to chemical crop protection is called biological pest control.

In their research into the biological management of insect pests, the Wageningen scientists investigated the effects of a virus that lives in a parasitic wasp that can be used in biological control of caterpillars of cabbage butterflies.

The effects of the virus proved very diverse and complex. First, the virus causes the immune system of the caterpillar to disregard the wasp larvae growing inside it. This allows the larvae to grow and mature, and eventually turn into full-grown wasps that themselves reproduce. But the scientists also found another, very different, effect. If the virus of the parasitoid wasp becomes active in the caterpillar, the enzymatic composition of the caterpillar’s saliva changes, affecting the cabbage plant on which the caterpillar feeds.

The changes in the caterpillar’s saliva incite the plant to produce volatile compounds, which the scientists found to have two surprising effects. They caused cabbage butterflies to find the plants less attractive to lay eggs on, which is beneficial to cabbage growers. At the same time, the volatile compounds caused the plants to attract a natural enemy of the parasitic wasps: so-called hyperparasitic wasps, which lay their eggs in the parasitic wasps that feed on the caterpillars.