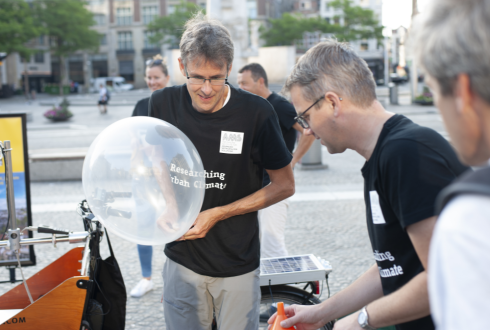 After a warm day, the heat creates a lid on the city. During last July's heat wave, researchers from Wageningen University & Research (WUR) and Amsterdam Institute for Metropolitan Solutions (AMS Institute) launched weather balloons from Dam Square to map the height of this lid – the so-called urban dome. The results of the measurements show that in the evening the heat of the city impacted temperatures up to a height of 120 meters (about 50 stories high). Also, in the evening it remained 3.4 degrees warmer in the city than the countryside.

The aim was to find the cross-over point, the altitude in the atmosphere where the city's heat is no longer noticeable, and the temperature is equal to the temperature of the rural area. In order to map the difference between city and countryside, measurements were also made in a rural area 22km outside of Amsterdam.

The late afternoon of July the 24th shows a temporary influx of air from the sea, which takes a cool sea breeze far inland. This results in the rural area in a dropping surface temperature, which decreased to 22.9 ºC at 22:00 hours. At the same time higher up in the atmosphere, researchers found a radiation inversion caused by a warm influx of air from the south of Europe. This means that higher into the atmosphere the temperature rises.

The urban heat-island creates a lid on the city

In the city it took longer for the heat to dissolve and at 10PM sensors on the weather balloon still recorded a temperature of 26.3ºC at the Dam Square. The temperature measured at the same time on the countryside was a full 3ºC lower. This shows how the heat creates a lid on the city that traps air pollution in the city. During the rest of the night of the 24th of July, the temperature in the city centre never went below 23ºC.

"The measurements show that the city has its own influences that cause the urban weather model to differ strongly from the rural weather model. Cities are generally warmer than their surroundings because heat is trapped in bricks, roads and buildings. The city itself also produces a lot of heat. This can have adverse effects on human health, labor productivity, energy consumption, critical infrastructure, air quality and surface water quality," says Stephan van Dijk, Director of Innovation at AMS Institute.

Suburbs warmer than the city centre

In order to map heat differences within the city, the observations of 24 weather stations located in the city have been added to the analyses. These measurements show significant differences. During the heatwave, the city centre reached a maximum temperature of 35.7 ºC during the day. Strikingly enough, the highest temperatures were measured in the suburbs at 38.4 ºC in Holendrecht, followed by Osdorp (38.2 ºC) and Amstelveen (37.3 ºC). This can be explained by the relatively high building height and narrower streets in the centre of Amsterdam, as the streets are protected by the shade for a relatively longer time.

It is also remarkable that temperatures on the nature island Strekdam in the middle of the IJ river never rose above 29ºC. While the rest of the city was seeing peak temperatures around 5PM breaking 38ºC, the Strekdam island - only 7.5km from the city centre - showed a balmy 27.3ºC. Comparison of the different weather stations’ data also showed relatively high wind speeds above the IJ river, while there was almost no wind in the city. This shows why water and wind are important elements to enhance cooling effects. "With a correct balance of water, greenery and buildings, a 'thermal pull' can be created, which will allow the air to move better through the city. This makes the city's living environment more pleasant and ensures that heat and air pollution disappear more quickly. In addition, water features in combination with shade from trees or greenery can reduce the heat load for residents," says Bert Heusinkveld, researcher at Wageningen University & Research.

Blueprint for a climate-proof city

The last time comparable vertical weather profiles were collected was more than 50 years ago in New York. A helicopter was used for this purpose. In the scientific literature this is still used as a frame of reference. The results of this research contribute to form a new blueprint to help design a climate-proof city. This is not only important for Amsterdam, but also for other cities worldwide. "For cities in Europe where the climate is comparable, the atmospheric layer will develop more or less similarly. Cities such as Hong Kong, Jakarta and Rio de Janeiro have more hours of sunshine and significantly more and higher buildings. In these cities, the urban dome will reach much higher than measured in Amsterdam," says Gert-Jan Steeneveld, researcher at WUR. 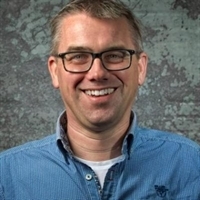 Do you have a question about our weather balloon research? Ask our experts: dr.ir. GJ (Gert-Jan) Steeneveld
Contact form + Show more (1)

The data visualizations are made by design agency CLEVER°FRANKE and AMS Institute’s Data Visualization Lab.