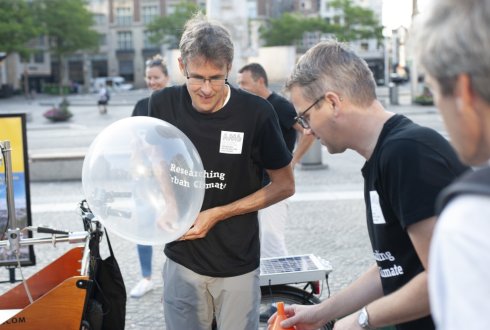 Researchers of Wageningen University & Research and Amsterdam Institute for Metropolitan Solutions (AMS Institute) launched every two hours weather balloons from the Dam in Amsterdam on Wednesday 24 July during 24 hours. This in support of better understanding urban climate. The weather balloons measured the height up to which heat in the city differs from temperatures outside the city. The last time vertical measurements were ever taken, was by helicopter above New York in the 1960s.

Heat remains as a lid above the city after a warm day. This research investigates the height to which this lid, the urban heat island, is extending. At the same time of the measurements taking place above Amsterdam city centre, measurements were also made in the countryside near Breukelen. The researchers want to find out the crossover point  in this manner: the height in the atmosphere on which the heat island of the city is not noticeable any more and the temperature equals the temperature above the rural area. This information will be used for the development of accurate urban meteorological models.

A new page of Amsterdam history

The weather balloons measure temperature, air humidity, wind speed and -direction. Measurements are being recorded every two seconds. The measurements are registered up to a height of 2.5 kilometres. “It is unique to launch weather balloons in a city,” says Gert-Jan Steeneveld, researcher Meteorology and Air Quality at WUR. “It is over fifty years ago, that vertical weather profiles with temperature, wind speed and humidity were assembled. That research is still used in the scientific literature as a reference framework. The current measurements add a page to the history books on Amsterdam in the area of meteorology."

Over half of the world's population live in cities. Because of climate change, heat is causing pressure on the cities and its inhabitants, who are subjected to the impact of heat. Cities are usually not equipped to counteract this. “In the city, heat is retained in stones, roads and buildings. The city itself is also producing a lot of heat,” explains Gerben Mol, programme manager Climate Resilient Cities at with AMS Institute. “It is still often underestimated, how much impact heat stress has on the vitality and productivity of a city's inhabitants. For this reason, understanding the urban climate and the predictability of a city's weather profile is an issue of growing importance.”

Lid on top of the city

Besides heat, also the diminishing air quality poses a challenge to cities. It can be deduced from the balloon observations, how thick the mixing layer is. “This the lowest layer of the atmosphere and the height to which the influence of for example heat and air pollution on the surface is still manifest and noticeable,” says Bert Heusinkveld, researcher Meteorology and Air Quality at WUR. “Above this, the free atmosphere starts. The mixing layer is thicker during warm days and it generates a kind of lid on top of the city. This causes air pollution to remain stuck in the city and that has an impact on the health of inhabitants,” according to Heusinkveld.

When will the results of the research be available?

The results of this research are being added to the joint research project Amsterdam Atmospheric Monitoring Supersite. This project monitors the horizontal weather profile of Amsterdam, using 25 measurements stations. The research results are being processed into a data visualisation, that is developed by the design agency Clever°Franke. The visualisation is to be presented in the beginning of September. The Wageningen researchers will, in conjunction with this, prepare a scientific publication that can be instrumental in better understanding the urban climate worldwide.

Do you have a question about the weather balloons? Ask our expert: dr.ing. BG (Bert) Heusinkveld
Contact form + Show more (1)