Recently, researchers associated with Wageningen Marine Research published an article in the scientific journal Polar Biology, where they discuss anthropogenic debris in Arctic fox faeces from Iceland. Samples from different decennia show that plastic has been ingested since the 1990’s but that frequencies of such uptake are low.

The aim of this study was to quantify the ingestion of man-made debris by analysing Arctic fox poo. In addition, the researchers wanted to know if analysing Arctic fox poo would be a suitable method for monitoring plastic pollution in the Arctic. Masters student Birte Technau from the University Centre of the Westfjords in Iceland collected the faecal samples together with researchers from the Icelandic Institute of Natural History. The analysis of the samples was conducted at Wageningen Marine Research and the results are now published in Polar Biology.

Plastic pollution in the Arctic

Man-made debris such as plastic is ubiquitous in the world and the Arctic is no exception. This type of pollution in the Arctic is likely to grow in the future due to an increase of tourism, a poleward expansion of fishing and shipping activities resulting from climate warming. Anthropogenic debris has already been found in the Arctic sea ice, in the water, in sediment and in the digestive tract of marine and coastal organisms However, fewer studies analysed plastic in coastal and terrestrial mammals and several knowledge gaps about exposure of Arctic terrestrial animals to anthropogenic debris remain. Currently the northern fulmar is the only bio-indicator for plastic in the marine surface environment. There is no designated terrestrial indicator species for environmental pollution for Arctic food webs.

The entire dataset of 235 samples comprised of samples from 1999, 2017, 2018 and 2020 and were collected in different Icelandic regions. The samples were processed in the laboratory at Wageningen Marine Research using an chemical cleaning method where both diet content and potential debris analysis remain intact.

Out of 235 samples, twelve anthropogenic debris particles (5.11%) were found and none of the samples contained more than one debris item. Nine out of twelve items were categorized as plastic. Two other items were categorized as ‘paper’ and one as ‘tar’. Low amounts of debris were found in all years and regions studied. No temporal or spatial trends were detected. The uptake of plastic could not be linked to dietary preferences in Arctic foxes.

The suitability of Arctic fox faecal analysis as a monitoring method remains debatable. Although the non-invasive character of poo collection and the broad distribution range of Arctic foxes are essential for a good indicator species, the low frequency of occurrence of anthropogenic debris in faecal samples of Arctic foxes makes it difficult to calculate long-term trends. Also the broad diet spectrum of Arctic foxes from both marine and terrestrial sources hamper the detection of plastic debris sources. Nevertheless, as plastic pollution increases in the Arctic further research is desirable to determine whether the Arctic fox could be a suitable bio-indicator for plastic pollution in the circumpolar regions in the future. 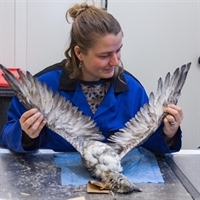 Do you have a question about this research? Ask our experts: dr. S (Susanne) Kühn
Contact form + Show more (1)