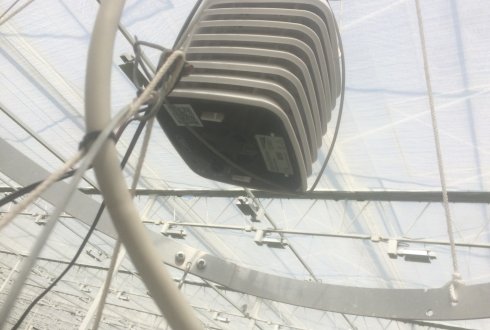 Climate equality is important for growers in greenhouses: temperature and humidity differences can lead to production and quality losses in cultivations of vegetables or flowers. To monitor the climate it is therefore important to have sufficient measuring points. The Business Unit Greenhouse Horticulture of Wageningen University & Research investigated the use of a grid of high density wireless sensors. They turn out to be a good tool to monitor and reduce climate differences, but at the same time they are complex source of information.

The research is being carried out at a grower of roses in South Holland. The 6.4 ha greenhouse was already equipped with four so-called measuring boxes. The climate computer uses their measurements to steer the actuators. In addition, a total of 106 wireless sensors were placed to measure both temperature and relative humidity. Each sensor is located at crop height, equipped with a fan to minimize the effect of radiation. Sensor information can be visualized through a user-friendly dashboard on the computer screen.

Compared to the conventional measuring boxes, the grid of sensors can measure the climate on a 25 times smaller area. The grid of sensors thus provides a better picture of local climate differences and their magnitude in real time in the greenhouse. This makes it easier to measure where in the greenhouse there are warm spots or cold spots, and where the humidity varies greatly.

Growers can use the information about the temperature and air humidity to manually set the climate control strategies, to so ensure a uniform climate. However, climate differences depend on many factors (e.g. outside temperature and wind speed) and there are many ways to intervene to reduce climate inequalities (such as fans and greenhouse windows control). For these reasons, data analysis should be carried out by an expert or even by an algorithm. In addition, further steps are needed in creating a more standardize protocol which can help growers in the choice and set-up of sensors.