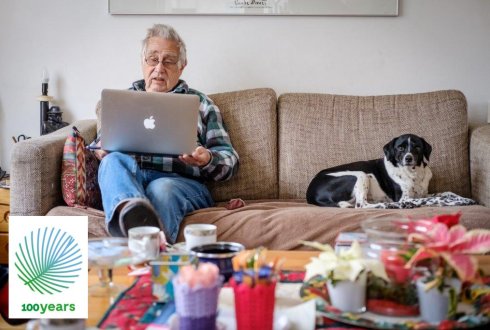 The milkman, the clatter of hooves and a girl on a beautiful bike. These all come into a song from 1960 about Wageningen Hoogstraat (High Street). Kees van der Does, alias Don Lapides, was a student at the Agricultural College at the time and wrote countless songs about his student days.

Van der Does – whose nickname, Don Lapides, is an obscure Latin wordplay referring to his mischievous nature – soon gained a reputation for his cabaret texts.

It all started when the freshers’ week committee at student society SSR required its newbies to perform a cabaret. ‘Then I wrote two songs, one of which was the ‘Klooielied’ to the tune of Marina, by Rocco Granata,’ says Van der Does. Later singer-songwriter Jules de Corte performed at SSR, inspiring Van der Does to further efforts, including a poem about a louse couple on a bald head. This was followed by many more songs, poems, and performances at the student society and in the Junushof theatre.

The Agricultural College had a big anniversary in 1958, and SSR, KSV, Ceres, Unitas and WVSV (the girls’ society) offered to put on a joint cabaret. A friend of Van der Does’s was one of the organizers, and he asked him to take part. He refused. ‘I wouldn’t even consider it,’ he ways. ‘Relations between the societies were so bad you could bet your bottom dollar everyone would trash each other’s texts. I had no interest in that whatsoever.’ A couple of weeks later it turned out that each society would put on a single act. ‘That meant I would be solely responsible for a cabaret act. So I decided to join in after all.’ Van der Does’s cabaret was a success until he closed with a then well-known student song ‘Io Vivat’. ‘The Ceres lads deliberately sang out of tune. In their opinion only corps (Ceres) members were real students. The rest didn’t count. Unitas members were the lowest of the low in their eyes, they were plebs.’

His songwriting brought Van der Does unexpected advantages. He passed his oral exam on livestock feeds because his lecturer liked cabaret. ‘That teacher’s lectures were unbearable. Every week he just served up the characteristics of a feed. You can read that in a book so I never went. I had to make an appointment for my oral exam, and he said, “But Mr Van der Does, I have never seen you in my lectures.” When the lecturer recognized him as ‘the songwriter’, his oral went ahead anyway.

He wrote countless songs about his student days. The one about the Hoogstraat even came out as a single. He lived in a student house on the Hoogstraat and sang about the day-to-day events on the street. ‘I often looked out of the window and saw life on the Hoogstraat from above.’ The recording is on his laptop. Would I like to hear a bit of it?

‘I can watch the Hoogstraat from my bedroom window
And am often filled with horror, shock and fear
What they get up to on the street down there below
I assure you, my dear friends, you have no idea.’

Van der Does still performs at SSR occasionally. ‘Five years ago I was asked to perform at a reunion. I put together a programme for the people attending the reunion, but the current students wanted to hear it too. So I did the dress rehearsal for them, with some extra explanations about the context of the texts.’ In 2015 Van der Does collected some of his texts in a book. Fifty copies were printed, and he kept one. But his nicest song is not in the collection, he says. ‘I wrote that one for my Filipino wife, when we had been married 50 years.’

Van der Does sent his song to the 100x100 website for the centennial of WUR. Besides memoirs, money can be donated on this website towards various projects that take place during the centenary celebrations. The memoirs will be exhibited on the alumni day on 23 June 2018.