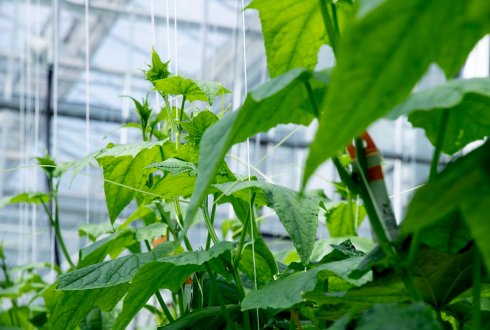 The first International Autonomous Greenhouse Challenge was won by team Sonoma. The team defeated four other international teams, consisting of experts in the field of Artificial Intelligence (AI) and horticulture. The Challenge - organized by Wageningen University & Research and sponsored by Tencent and David Wallerstein (CXO Tencent) - concerned the question: can AI take control of the climate and the irrigation in a greenhouse?

In the greenhouses of WUR in Bleiswijk, five compartments of 96 square meters were installed in August. Each team was instructed to grow cucumbers in a compartment using AI until the first week of December. The final result was dependent on three factors: the net profit (the sales price for the harvested cucumbers minus the costs for energy, water, labor, etc.), the use of AI (was the algorithm new or was the computer program robust enough) and sustainability (such as: the amount of water, CO2 and energy used per kilogram of cucumbers).

The teams came from all parts of the world. Team The Croperators consisted of AgroEnergy and Delphy employees, team deep_greens from Intel employees and a Mexican university, team iGrow from Tencent employees and a Chinese agricultural university, team AiCU from Chinese students and researchers all working in the Netherlands and team Sonoma from employees of Microsoft Research and students from a Danish and Dutch university. In addition, there was a reference team with a number of Dutch vegetable growers who grew cucumbers manually. Tech partner LetsGrow.com supported the challenge.

Ultimately, team Sonoma won with a narrow lead on team iGrow. The team of Dutch growers also scored well. But that does not mean that all greenhouses will now be fully run by computers. First of all, the scale of the Challenge was limited. In addition, there are many decisions and crop work in and around greenhouses for which people are indispensable.

Is AI usefull in greenhouses?

The goal of the Autonomous Greenhouse Challenge was therefore not the development of a fully autonomous greenhouse. It was a benchmark, where do we stand with the development of AI for use in greenhouses? Other important questions were: which cultivation strategies did the teams use and how can they be used in 'traditional' horticulture, and how can AI be better applied in horticulture in the future?

The prize-giving ceremony was on Wednesday 12 December during the AgriFoodTech exhibition in Den Bosch (12-13 December). There visitors could meet the winning teams.

Previous news about the challenge: