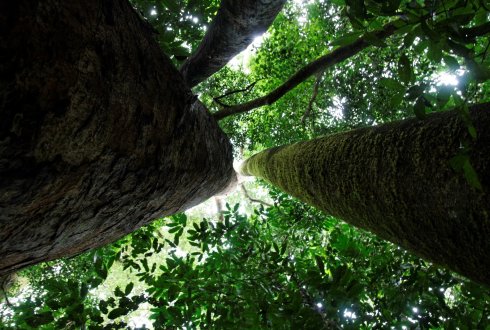 We should stop being gloomy about the decline of tropical forests, but rather look at what products, services and ecological values these rainforests could bring in the future. To do this, we need research on the effects of exploitation, fragmentation and climate change on these rainforests. This is the message that Pieter Zuidema conveyed during the lecture he gave on his inauguration as Professor holding a personal Chair in Tropical Forest Ecology at Wageningen University on 10 September.

“An important question to start with is to what extent the huge diversity of plant and animal species in tropical rainforests would be preserved if these were to become fragmented or exploited”, says Zuidema. “One of the challenges would be to discover whether tropical tree species can survive in landscapes where only portions of forests of various sizes remain. This depends on the size of those portions of forests and on the genetic exchange between them.” To learn more on this, Zuidema will be conducting research in Asia together with his group on the effects of forest fragmentation.

A second challenge for forest ecologists and foresters is to ensure that there is sustainable production in tropical forests. The amount of tropical hardwood and other forest products currently harvested are usually unsustainable. Zuidema: “In about twenty to thirty years, the amount of hardwood available will only be about one third to one half of the amount available today. We have to look for conditions which can ensure that this production increases.”

It is also unclear to what extent tropical rainforests are resistant to future global warming. “The large-scale models that calculate what the state of tropical rainforests will be in 2100 might show an overly optimistic view. These assume that part of the negative effects of global warming on the growth of trees will be compensated by the positive effects of the extra CO2 in the air. However, research has shown that the 40% increase in CO2 concentration since 1850 has not stimulated tree growth. It is about time we understood how CO2 increase could influence tree growth,” states Zuidema. “Perhaps tree growth is determined by the circumstances that wood needs to grow, and maybe tropical rainforests are much more vulnerable to global warming than we think.” This is why he wants to perform detailed studies on the factors that govern the formation of the wood of tropical tree species.

In his inaugural lecture, Zuidema also makes a stand for creativity in science. “It might be that most scientific progress has been made during walks in the dunes, while making music, while traveling on the train or over a nice cup of coffee in a pleasant café.”