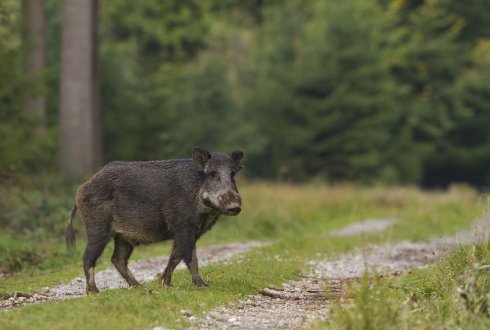 The serious viral disease African Swine Fever (ASF) was found in wild boars in Belgium (Luxemburg Province in the Ardennes) on 13 September. How the virus got there is as yet unknown. This means that the virus has made a huge jump, reaching one of our neighbours. The risk of introduction into the Netherlands from Eastern Europe has, however, not changed.

This is in line with the risk analysis that WBVR drew up in August at the request of the Dutch Ministry of Agriculture, Nature and Food Quality (LNV).

The risk of ASF entering the Netherlands

The Netherlands can still be hit by African Swine Fever tomorrow, in 20 years or not at all... But it does show that jumps across extremely large distances are possible. It appears for the present to be a one-off, as over the four years that the disease has been present in the EU it was introduced in a mere three countries (Czech Republic, Hungary and Belgium).

The risk that the disease will enter the Netherlands from Belgium depends strongly on the situation and developments in Belgium. In the worst-case scenario, the risk to the Netherlands may increase rapidly in a relatively brief period.

How do pigs and boars become infected?

There are different routes of dispersal. In this regard, dispersal via bringing in contaminated food (meat, sausage etc.) is one of the routes where humans have a large influence. For this reason, it is extremely important not to dispose of these products in natural surroundings or to take them onto pig farms. Additionally, hunters should ensure that they do not bring in contaminated materials or (parts of) wild boars by observing sound hygiene measures when hunting and gutting game, and by not hunting in areas infected with ASF.

What should be done in the event of a suspect case?

For pig farmers, nature lovers and hunters, it is essential to be alert to suspicious symptoms in pigs or wild boars and to report these as soon as possible in order to prevent spreading as far as possible.

The Netherlands is able to combat an outbreak quickly

Should African Swine Fever be introduced, the Netherlands is ready to combat an outbreak rapidly. There is a plan of action that is immediately put into effect by the NVWA at the first sign of an outbreak, with a view to combating the outbreak as quickly and efficiently as possible. In the event of a suspected case, the NVWA takes samples at the relevant location.

The role of Wageningen Bioveterinary Research

Wageningen Bioveterinary Research (WBVR) contributes to suppressing ASF by rapidly testing these samples for the presence of the virus. We coordinate the monitoring of wild boars for ASF, as we do for classical swine fever and Aujeszky’s disease. Up to mid-2018, more than 900 samples were tested, all of which were negative. In addition, we carry out research for maintaining and expanding expertise, as well as advise the government and other organisations on ASF.