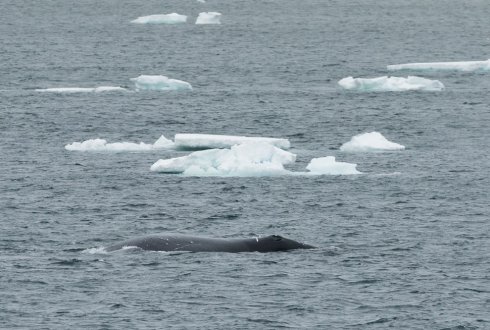 Scientists of Wageningen Marine Research have just returned from the Arctic after a successful expedition organised by Oceanwide Expeditions, Inezia Tours & Natuurpunt. During the spring, whilst working in the Greenland Sea to the Southwest of Spitsbergen, the scientists discovered a group of at least 100 foraging bowhead whales (Balaena mysticetus). This is a rare and endangered whale which is believed to be almost extinct and is consequently classed as ‘Critically Endangered’ according to the IUCN.

For some years scientists from Wageningen Marine Research have worked as expedition guides on board the expedition vessel Plancius from Oceanwide Expeditions. Since 2015, increasing numbers of bowhead whales have been observed on the edge of the pack-ice off East Greenland during these expeditions, but this year all previous numbers were exceeded. On the 1st June 2018, during almost 7 hours steaming along the pack ice, a total of 104-114 bowhead whales were systematically counted.

The bowhead whale is well adapted to live in the Arctic and is therefore the only large whale that can survive year-round in this extreme climate and specifically along the pack-ice. The sub-population of bowhead whales in the area of Spitsbergen/Greenland Sea has been greatly reduced since the whaling operations from the 16th century and consequently this subpopulation, which is estimated to number ‘several hundreds of whales’ is now listed as Critically Endangered on the Red List of the IUCN.

In 2015, during a similar expedition, a total of 90 bowhead whales were recorded. It became immediately clear to the scientists that this type of data has an important scientific value as so little is currently known about this species that occurs in the Greenland Sea. The data indicate that the bowhead whales gather along the pack-ice during May/June. Old whaling data from the 16th century onwards highlight that the whales were hunted in the waters to the northwest of Spitsbergen (in April/May) and migrated south-westward by late spring (adult males and females without calves), while others moved north from Spitsbergen into the receding pack ice. Acoustic data has recently shown that during the winter months the bowhead whales occur further north off West Spitsbergen.

The bowhead whales were intensively hunted from the 16th century onwards for several hundred years and the various subpopulations that occur in the Arctic have yet to recover. Added to this the species’ very survival is now under threat from climate change. Even though it appears that the Spitsbergen sub-population may be larger than previously assumed, continued international research is still very necessary. In spite of the exceptional numbers of Bowhead whales encountered by the scientists this spring it is clear that this long-lived whale continues to be on the brink of extinction.

Do you have a question about Bowhead whales? Ask our expert: dr. MN (Marijke) de Boer
Contact form + Show more (1)