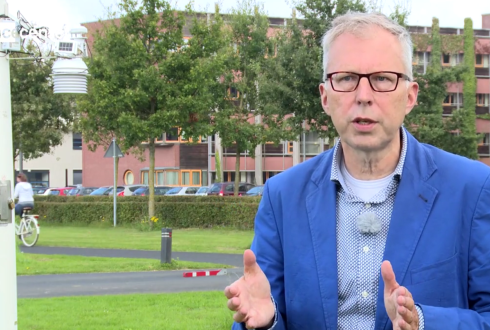 Meteorology Chair Holder Bert Holtslag has been appointed a Fellow of the American Meteorological Society (AMS). An appointment like this is only awarded to scientists who, over a period of many years, have made an exceptional contribution to meteorological or hydrological sciences or to practical applications in these disciplines.

Every year, just 0.2% of the 14,000 AMS members are elected to a fellowship. The official ceremony will not take place until January 2016, during the AMS conference in New Orleans, but the names have already been announced. In a reaction Bert Holtslag said: “I’m delighted with this American recognition of the exciting and varied work I’ve carried out with many colleagues over the years.”

Only AMS members are eligible for election to fellow and only members may nominate a candidate. There are strict rules attached to this. A nomination has to be supported by at least three people, of which at least one is employed outside the nominee’s organisation. The request has to clearly demonstrate that the nominee meets the criteria of ‘outstanding contributions to the atmospheric or related oceanic or hydrologic sciences or their applications during a substantial number of years’.

It goes without saying that Bert Holtslag meets these criteria. He has an excellent track record as a teacher, researcher and research leader in national and international programmes involving meteorology and climate sciences, for example in the context of land-atmosphere interactions and the atmospheric boundary layer, as well as the exploitation of this knowledge for wind energy, the spread of air pollution and the weather in cities. He has held the Chair of Meteorology at Wageningen University since 1999. Previous to that he was Professor (by special appointment) of Meteorology at Utrecht University, a post to which he was appointed while working as a scientific researcher at KNMI (Royal Netherlands Meteorological Institute).